Bitcoin might be down to the last layer of defense for a potential bounce as it tests the bottom of its symmetrical triangle on the 4-hour chart. A bounce could take it up to the top at $9,000 or perhaps for a break higher while a move below $7,000 could be enough to confirm that steeper losses are in the cards.

The 100 SMA crossed below the longer-term 200 SMA to confirm that the path of least resistance is to the downside. This suggests that the selloff is more likely to happen than a bounce. The gap between the MAs is also widening to reflect stronger selling pressure.

RSI, however, is pulling up from the oversold region to signal a return in buying momentum. Stochastic is also heading higher so bitcoin price might follow suit. A break past the top of the triangle could lead to a rally of the same height as the formation. 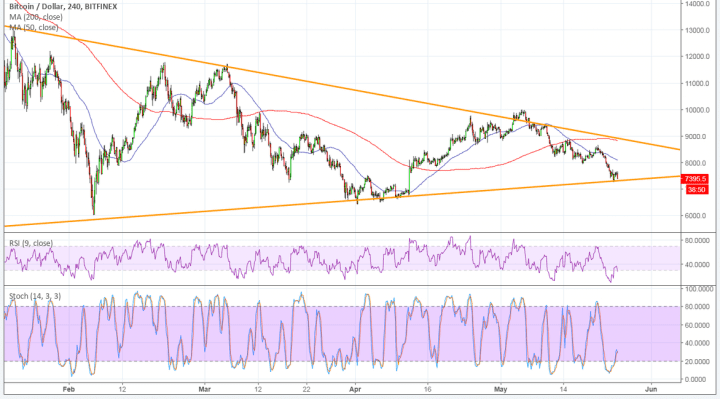 However, bitcoin has been weighed down by reports of stricter regulation, with the CFTC gearing up to provide guidance for exchanges listing virtual currencies and the US Department of Justice launching a criminal probe into price manipulation involving cryptocurrencies.

Still, these developments could later on boost the legitimacy of the industry and make investors feel more secure. For now, though, the uncertainty appears to have led to more liquidation of positions.

On the flip side, the dollar is also on weak footing owing to slower tightening expectations and resurfacing geopolitical tensions. Trump decided to back out of the meeting with North Korea next month and the proposed 25% tariffs on auto imports has also put a strain on trade relations. Although these normally inspire a flight to safety, the dollar could remain at risk since any retaliation could be negative for the US economy mostly.