Bitcoin continues to trend lower but could be due for a quick bounce as a bullish divergence is materializing. In particular, stochastic is making higher lows while price made lower lows since May 23.

However, the upside could be limited to the descending trend line connecting the highs of price action on the 4-hour time frame. This lines up with the 100 SMA dynamic support, which adds to its strength as resistance.

The 100 SMA is below the longer-term 200 SMA to signal that the path of least resistance is to the downside. This means that the selloff is more likely to continue than to reverse. Also, the gap between the two is widening to reflect stronger selling pressure.

RSI appears to be on the move up to signal the presence of bullish pressure while stochastic also looks ready to turn higher. Stronger bullish pressure could lead to a move past the area of interest around $7,500 and a test of the next resistance around $8,500. 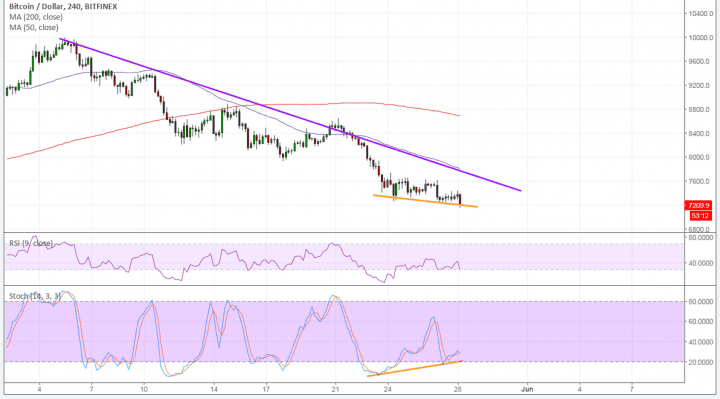 Bitcoin continues to slide on account of the massive amounts of units likely being sold by Mt. Gox to pay its creditors. There have hardly been any positive developments in the industry over the previous week, so bounces have been limited.

At the same time, dollar demand has been supported for the most part due to resurfacing geopolitical uncertainties and trade tensions. Although Fed rate hike hopes turned slightly lower after the FOMC minutes were released, traders continue to price in tightening for June.

Dollar traders could focus on the NFP release and leading jobs indicators this week to gauge if the Fed can still pick up their pace of hiking. Analysts are expecting to see a slight pickup in hiring for May, but the average hourly earnings figure would likely gather more interest as policymakers are keeping close tabs on wage growth.