Bitcoin continues to trend lower and is currently testing the bottom of its falling wedge formation. A bounce could take it back to resistance, which lines up with the 100 SMA dynamic inflection point.

Speaking of moving averages, the 100 SMA is below the longer-term 200 SMA to confirm that the path of least resistance is to the downside. This suggests that the drop is more likely to persist than to reverse or that support is more likely to break than to hold. A move below the $7,000 support level could take bitcoin down by the same height as the formation.

The gap between the moving averages is widening to reflect stronger selling pressure. However, stochastic is already dipping into oversold territory to signal exhaustion among sellers. Turning higher could draw buyers back in a spur a pullback to the wedge resistance at $7,400.

RSI seems to be pointing down again to reflect a return in bearish pressure even without seeing overbought conditions. 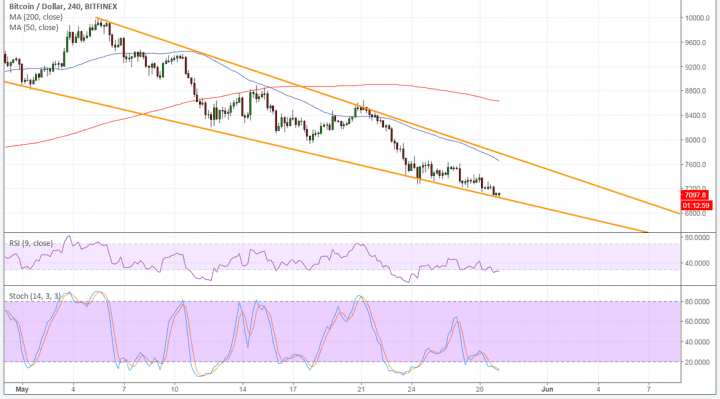 Cryptocurrencies have been under pressure for the past few weeks on the lack of positive industry updates and the renewed attention regulation. The US Justice Department is currently conducting a probe on price manipulation for altcoins and their findings could strongly affect confidence in the industry.

Meanwhile, the liquidation of massive amounts of bitcoin on Mt. Gox to pay off its creditors has also been a big drag on price. Investors remain wary of reestablishing their long positions while this is going on and while bitcoin keeps breaking below key support zones.

Risk aversion has also lifted the dollar against most of its counterparts, even with the FOMC minutes suggesting a slower pace of tightening later on. Political troubles in Spain and Italy have dampened demand for stocks and commodities, spurring a flight to safety that usually benefits the dollar.