Bitcoin recently broke past a short-term descending trend line to signal that an uptrend is underway. Price is now forming an inverse head and shoulders pattern and looks ready for a test of the neckline.

A break above this resistance level could lead to a climb of the same height as the reversal formation, which spans $7,000 to $7,600. The 100 SMA is below the longer-term 200 SMA, though, so the path of least resistance is to the downside. However, the gap is narrowing to signal a potential upward crossover.

RSI is moving up to show that buyers have the upper hand. Similarly stochastic is pulling higher to indicate that bullish pressure might be enough to spur an upside break of resistance.

It’s also possible that bitcoin could pull back a little deeper before gathering more bullish energy. A dip back to the broken trend line could draw more buyers in. 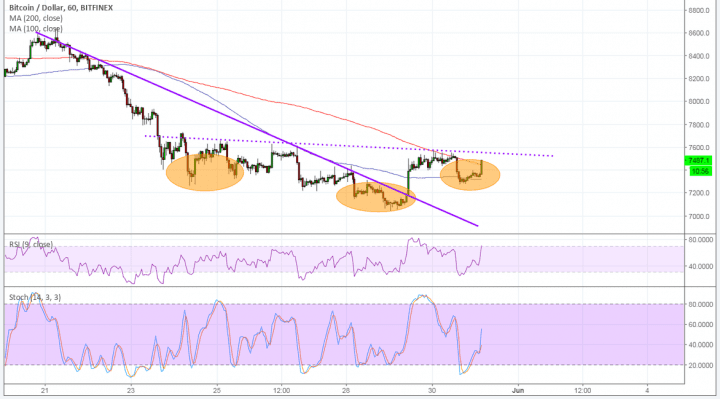 There hasn’t been much in terms of industry developments in bitcoin lately, leaving it sensitive to commentary and overall market sentiment. Fortunately there have been improvements in political tensions recently, so the riskier asset has been able to regain some ground.

However, there have also been a few naysayers that kept a lid on price gains. For instance Nobel Prize-winner Robert Shiller predicted that bitcoin might not even be around in a hundred years, citing that it could likely be replaced by some other cryptocurrency. He noted:

“The one scenario is that something like what happened after 2013 when bitcoin topped $1,000, and then lost 80 percent of its value. It looked like bitcoin was just fading away. It’s so hard to predict these things.”

Meanwhile, Ripple’s CEO also said that the influence of bitcoin on other cryptocurrency prices could also fade at some point. Brad Garlinghouse commented:

“There’s a very high correlation between the price of XRP and the price of bitcoin, but ultimately these are independent open-sourced technologies. It’s early, over time you’ll see a more rational market and behaviors that reflect that.”