Bitcoin is trading inside an ascending channel on its 1-hour time frame and looks ready to test support. This is close to an area of interest or former resistance located around $9,500.

The 100 SMA is safely above the longer-term 200 SMA to signal that the path of least resistance is to the upside. This means that the uptrend is more likely to continue than to reverse. The gap appears to be narrowing, though, so a downward crossover and return in selling pressure could be due.

Stochastic is also on the move down to indicate that sellers have the upper hand. RSI has climbed out of the oversold region but is turning back down to signal a return in selling pressure. In this case, a deeper pullback to the actual channel bottom around $9,200 could take place before buyers return. A break below this area, however, could trigger a downtrend. 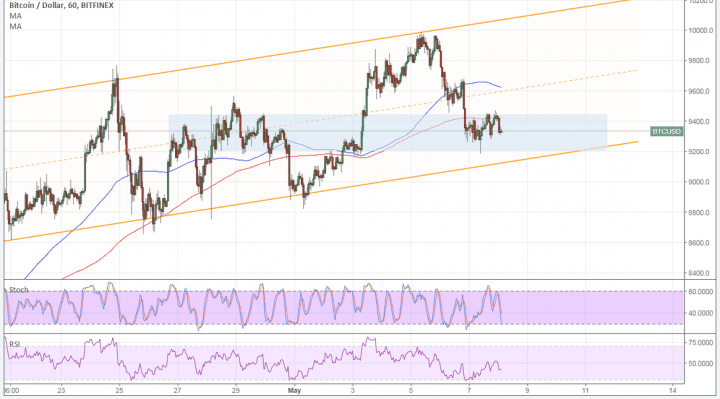 Bitcoin was weighed down by remarks from Warren Buffet and Bill Gates in their recent views, casting doubts on the cryptocurrency to hold on to its gains. Apart from that, profit-taking at the $10,000 major psychological mark also led to a drop.

Dollar demand remains supported as geopolitical risk has been in play. This could go on for a while until the dust settles on whether or not the U.S. will exit the Iran deal. Further safe-haven flows could favor the dollar, especially since FOMC officials have been mostly hawkish.

Still, developments in the bitcoin industry have been mostly positive and might be enough to keep bulls strong. It might need another set of upbeat reports to draw more buying pressure and spur a strong bounce back to the channel top or at least halfway through.