Bitcoin seems to be pulling back from its ongoing rally and applying the Fib tool on the latest swing low and high shows the next potential support zones.

The 100 SMA is still above the longer-term 200 SMA to indicate that the path of least resistance is to the upside. In other words, the uptrend is more likely to resume than to reverse. However, price is breaking below the 100 SMA dynamic support to hint at a pickup in selling pressure.

Stochastic is making its way out of the oversold region, though, which means that buyers are getting back in the game. However, RSI is on the move down so bitcoin could still follow suit and carry on with its correction until the oscillator hits oversold levels. 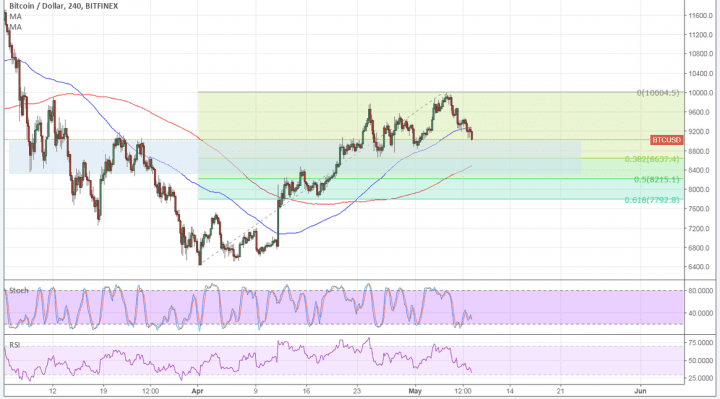 The cryptocurrency took hits after Warren Buffet compared it to “rat poison” and questioned its ability to be of value. To top it off, resurfacing geopolitical tensions on Trump’s decision to quit the Iran deal area also weighing on risk appetite or demand for bitcoin.

Meanwhile, NYSE parent company is said to be prepping to launch a bitcoin exchange that might bring more liquidity and trading activity to the market. This follows through on updates that big financial firms are warming up to bitcoin, as Goldman Sachs also previously unveiled plans to buy and sell the cryptocurrency.

Once institutional funds start pouring in, it could mark the start of yet another ascent for bitcoin, but of course it also has regulations and naysayers to contend with for the time being.