Bitcoin is trending higher on its 1-hour chart as it starts to create an ascending channel pattern. Price is currently testing resistance, though, and may need to pull back to support before heading further north.

Applying the Fib tool on the latest swing low and high shows that the 50% level lines up with the channel bottom around $4,100. Holding as support could lead to a bounce back to the channel top or the swing high at $4,500. Price already seems to be finding support at the 38.2% Fib at the mid-channel area of interest and moving averages’ dynamic inflection points.

The 100 SMA is crossing above the longer-term 200 SMA to indicate that the path of least resistance is to the upside. In other words, the uptrend is more likely to resume than to reverse. A break past the channel top around $4,600 could even usher in a sharper rally.

RSI is slowly crawling down, though, reflecting the presence of bearish pressure. This could keep the correction going for a bit longer until sellers are exhausted enough to let buyers take over. Stochastic, meanwhile, is already pulling up from the oversold region to signal a pickup in bullish momentum. 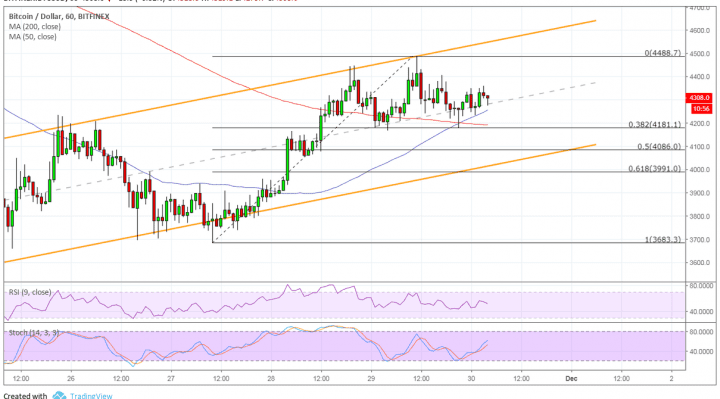 Bitcoin has been able to take advantage of an improvement in industry sentiment on revived hopes for institutional investment. Recall that these expectations were dampened by the recent bear market as many worried that big banks and hedge funds might rethink placing bets on the industry.

However, it was reported that Nasdaq is still aiming for an early 2018 release of bitcoin futures as it partners with VanEck on compiling data from much more exchanges compared to CME and Cboe. It is also working on getting CFTC approval even as the regulator tightened its standards after the other two exchanges offered bitcoin futures earlier on.