Bitcoin is trading inside an ascending channel within a longer-term ascending channel, but the shorter-term one has just encountered a breakdown. This suggests that another test of support may be in order.

The 100 SMA is below the longer-term 200 SMA to indicate that the path of least resistance is to the downside or that the selloff could go on for a bit longer. Price is still testing the 100 SMA dynamic inflection point and a move below this could spur a test of $6,400. On the other hand, a strong bounce off the 100 SMA could take bitcoin back inside the small channel for a test of the longer-term mid-channel area of interest around $6,700.

Stochastic is pointing down to signal that sellers have the upper hand, but the oscillator is nearing the oversold region to signal exhaustion. Turning back up could bring a return in bullish momentum and a continuation of the climb. RSI is still moving south to indicate that bearish momentum could stay in play for a bit longer. 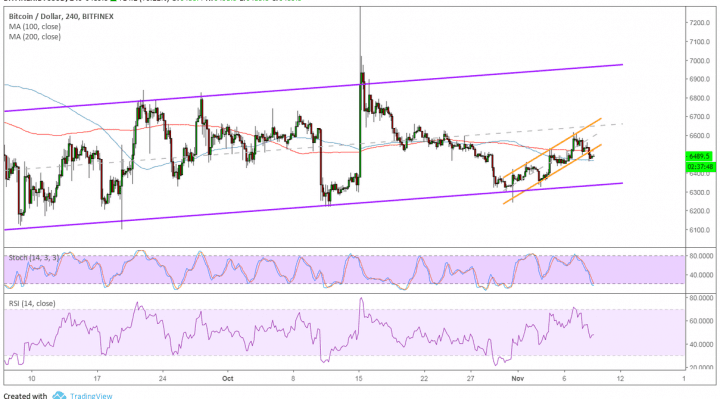 Bitcoin bulls likely booked some profits on reports that the SEC has closed its public comment period on bitcoin ETF applications, signaling that a decision may be due soon. Rejection could bring in more losses so it’s understandable that investors are seeking to reduce their exposure.

Another factor that could’ve spurred the dip was the FOMC statement, which signaled that a December hike is still possible. The Fed barely made any changes to its upbeat assessment and outlook, so the prospect of higher borrowing costs likely weighed on risk appetite and cryptocurrency gains.

Still, bitcoin could maintain its long-term climb as it has a lot to look forward to next year, particularly when institutional investments start flowing in. Keep in mind that Fidelity’s platform for bitcoin institutional investors might usher in stronger volumes in the first half of 2019.