Bitcoin recently popped higher but hit a roadblock and is now forming an ascending channel. Price has retreated to the mid-channel area of interest where buyers might be waiting to join in and push for a steeper climb.

The 100 SMA looks ready for a downward crossover from the 200 SMA to signal a return in selling pressure, but the moving averages might just simply be oscillating to reflect consolidation. These could still hold as dynamic support in a deeper pullback from the rally, though.

Stochastic is still pointing down and has some room to slide before reaching oversold levels, so sellers could have enough energy for more declines. RSI is just starting to crawl down from the overbought zone to signal a return in selling pressure. A test of the channel support around $6,400 might be a possibility and if it holds, bitcoin could revisit the spike higher to the $7,800 area. 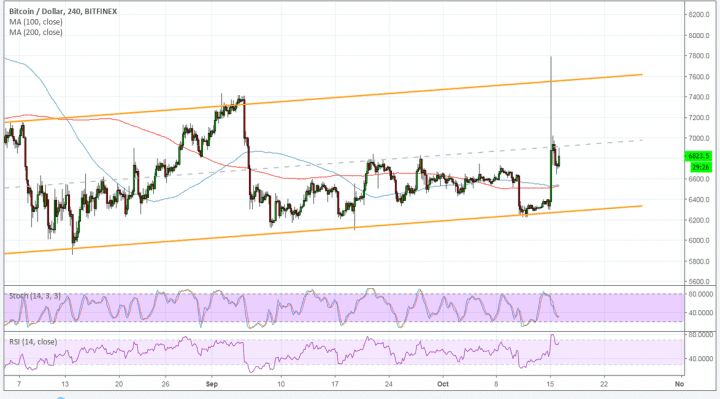 The sudden selloff in Tether, a stablecoin tied to the value of the US dollar and inversely correlated to bitcoin, sparked panic among investors who rushed to liquidate positions. This led to a corresponding rally in bitcoin, which also lifted most of its altcoin peers.

It also helped that Fidelity announced the launch of its institutional platform for bitcoin and ethereum, which would draw more volumes and increased activity. The technical breaks on bitcoin’s long-term charts also triggered FOMO among several traders, exacerbating the move.

Bitcoin has had a lot of factors to contend with in the past week but the fundamental picture is looking slightly brighter. Although the need for regulation has been emphasized, the building blocks for increased retail and institutional interest are continuously being laid, supporting the possibility of a strong rally to record highs before the year ends.