Bitcoin is slowly breaking past the top of its short-term symmetrical triangle consolidation pattern, indicating that more gains are in the cards. This chart pattern is around $300 in height so the resulting rally could be of at least the same height.

Zooming out to the longer-term time frames shows that this consolidation pattern is right around the resistance of a longer-term triangle, so a break higher could also be indicative of a bigger rally. The 100 SMA is still slightly below the longer-term 200 SMA to indicate that the path of least resistance is to the downside, but price is also above these dynamic inflection points to signal the presence of bullish momentum.

Price appears to be making a quick pullback to the broken triangle top but once completed, the uptrend could resume. Stochastic is still heading south, though, so there may still be some selling pressure left. The oscillator is nearing oversold levels which could indicate that sellers might feel exhausted soon, and turning back up could bring a pickup in bullish momentum. RSI, on the other hand, has more room to head lower so the dip could last a bit longer. 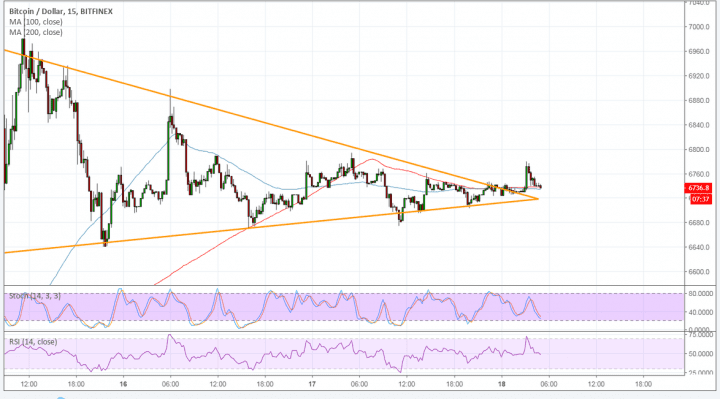 Recall that bitcoin is coming off a very strong rally on the heels of a panic selloff in Tether. However, most analysts believe that a longer-term rally could still be possible as Fidelity is launching an institutional platform for bitcoin and ethereum, which would make it more accessible to bigger funds. With that, stronger demand and volumes could lift price for the longer-run.

Of course there is still some degree of uncertainty, particularly when it comes to regulation. Keep in mind that many are still waiting on the SEC to make their decision on bitcoin ETF applications still in their comment period. A rejection could mean a drop in bitcoin as it would reflect a setback.