Bitcoin is slowly trending lower inside a descending channel seen on its 1-hour time frame and might be due for a test of the top. Applying the Fibonacci retracement tool shows that the 50% to 61.8% levels are near the top of the channel where sellers might be waiting.

The 50% retracement level is around $6,525 and also lines up with a former support turned resistance zone. This also coincides with the 100 SMA dynamic inflection point, which might add to its strength as a ceiling. The 61.8% level is just past the channel top and closer to the $6,550 level. It’s also near the 200 SMA dynamic resistance, which might be the line in the sand for a downtrend correction.

Stochastic is heading higher to signal that buyers are in control for now, but the oscillator is approaching overbought levels to signal exhaustion. Turning lower could allow the resistance areas to hold and price to fall back to the swing low or the channel support. Price is currently testing the 38.2% retracement level at the mid-channel area of interest, but RSI has more room to climb to signal that the correction could still carry on. 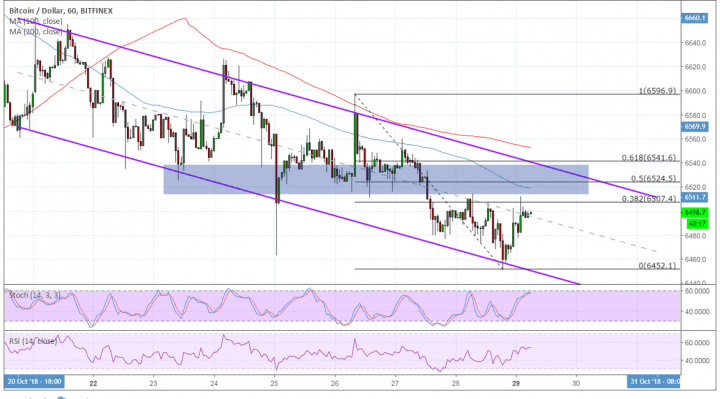 Traders continue to hold out for more directional clues that could sustain bitcoin’s longer-term rise, but for now profit-taking has been in play. Bulls have continued to defend support areas, though, so downside might be limited.

Besides, there are a handful of financial instruments that bitcoin traders can look forward to. One of these is the bitcoin futures on the ICE Bakkt platform, which could be ready for launch as early as next week. Next is the bitcoin ETF applications that the SEC is still conducting the comment period on but appears to be more inclined to approve. Lastly is the institutional platform of Fidelity for bitcoin and ethereum that would likely usher in bigger volumes early next year.