Bitcoin has been trading below a descending trend line visible on its 1-hour time frame and recently suffered a sharp drop. A pullback to the trend line might be due as this lines up with the Fib levels on the latest slide.

In particular, the 61.8% Fib lines up with the descending trend line around the $6,475 mark. This is also near the 100 SMA dynamic inflection point, which adds to its strength as a ceiling. This moving average is below the longer-term 200 SMA to confirm that the path of least resistance is to the downside. In other words, the selloff is more likely to resume than to reverse.

Stochastic is pulling up after recently hitting the oversold region, though, so bullish pressure could pick up and allow the correction to carry on. A break past the trend line and 200 SMA dynamic inflection point, however, could mean a reversal from the downtrend. RSI is also turning higher to signal a return in bullish momentum. 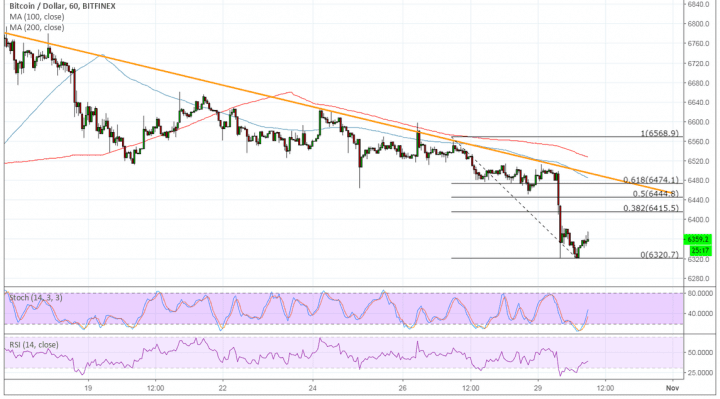 Bitcoin and other cryptocurrencies tumbled on news of an outage in Canada’s MapleChange, which led to the loss of over 900 bitcoins. The exchange assured that investigations are ongoing but soon took down its social media accounts and website, casting more doubts on what really went on.

This puts the industry a step back on its progress towards achieving more credibility with regulators and hopefully getting approval for more financial instruments based on digital assets. Keep in mind that traders are still waiting on the SEC decision on bitcoin ETF applications but the regulator has prolonged the public comment period while mulling whether or not related markets have enough measures to ensure consumer protection.

Still, looking at longer-term charts reveals that bitcoin is sitting right on major support zones, and bulls have been historically reliable in defending these areas.