Bitcoin appears to be gaining some traction off its bounce from the bottom of the rising channel on the 1-hour time frame. Price could be aiming for the next upside targets from here, and the Fibonacci retracement level indicates the potential take-profit points.

Price is already at the 38.2% level around $6,600 right now and might have some room for more gains until the 50% extension closer to the mid-channel area of interest. Stronger bullish pressure could take bitcoin up to the 78.65 extension that lines up with the swing high around $6,800. The full extension is located at $6,900.

The 100 SMA is above the longer-term 200 SMA to indicate that the path of least resistance is to the upside or that the rally is more likely to resume than to reverse. However, the gap has narrowed to signal a bearish crossover and return in selling pressure, possibly leading to another dip to support around $6,500.

Stochastic is on the move up to indicate that buyers are in control of price action, but exhaustion could be seen soon as the oscillator approaches overbought levels. RSI also has some room to climb so bitcoin could follow suit, but this oscillator appears to be turning lower to suggest that sellers are eager to return. 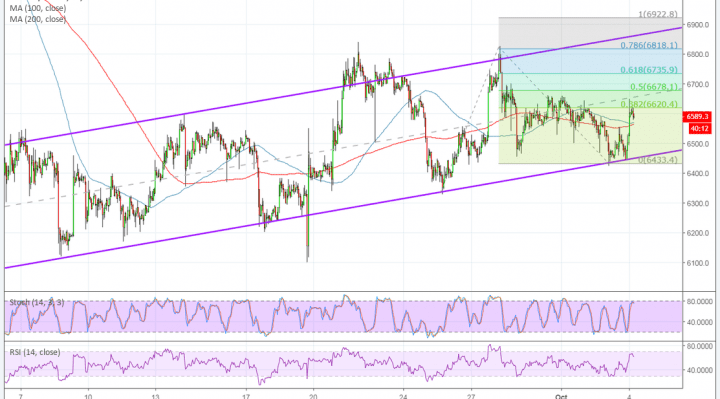 There have been a handful of positive updates for bitcoin in the past few sessions, although traders still seem to be holding out for bigger catalysts. Note that there is still some uncertainty surrounding the SEC ruling on bitcoin ETF applications, so bulls might be hesitant to build up their positions until the actual decision is announced.

Nonetheless, it’s worth noting how CFTC’s Giancarlo noted that cryptocurrencies are here to stay and that he sees a future in them, easing regulator jitters somewhat. This positive sentiment was also signaled by Twitter’s Dorsey who acknowledged that there could be a need for crypto among countries struggling with their own currencies.