Bitcoin is hanging around the top of its symmetrical triangle on the long-term charts, still deciding which direction to break out. Price is also trending higher inside an ascending channel visible on shorter-term charts.

The 100 SMA is below the longer-term 200 SMA to hint that the path of least resistance is to the downside. This means that support is more likely to break than to hold or that resistance is more likely to keep gains in check. Then again, these indicators could simply be oscillating to signal consolidation action. Price would need to close past these inflection points and the triangle top around $6,800 to signal that bullish pressure is in play.

Stochastic is pointing up to confirm that buyers have enough energy to push for more gains, but the oscillator is nearing overbought levels and looks ready to turn south. With that, the triangle top could hold once more and lead to another dip to support. RSI is on its way up but stalling halfway through to signal a pause among buyers. 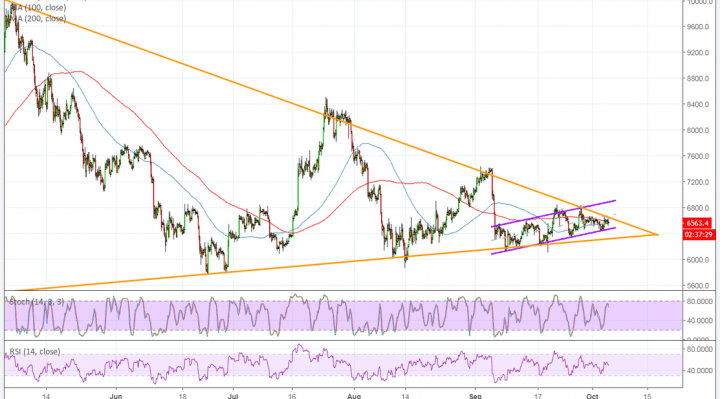 A break above the triangle top and also the channel resistance closer to $7,000 could spur a rally that’s around the same size as the triangle, which spans $6,000 to around $10,000. Similarly a break below support could lead to a drop of the same size.

Bitcoin appears to have a few more positive factors lined up in its favor these days, even though some of these developments have been minor. For one, Google’s reversal of its bitcoin ad ban could mean a pickup in general interest and also reflects trust in regulatory efforts in the US and Japan.

Fundstrat’s survey revealed that more than 50% of institutional investors believe that bitcoin has already bottomed out, which suggests they could be ready with their long positions in anticipation of a big rebound before the end of the year.