Bitcoin is still testing the top of its symmetrical triangle pattern seen on the daily time frame, possibly gearing up for a breakout as it approaches the peak. The 100 SMA is below the longer-term 200 SMA to signal that the path of least resistance is to the downside or that support is more likely to break than to hold.

This dynamic inflection point also lines up with the top of the triangle to add to its strength as a ceiling. In the event of a break higher, bitcoin could test the 200 SMA next as this lines up with an area of interest around the $7,250 level. A downside break could encounter some support at the $6,100 floor.

Stochastic is slowly creeping lower to signal that sellers are still in control and could keep pushing for declines. The chart pattern spans $6,000 to around $10,000 so the resulting drop could be of the same height. Similarly an upside breakout could trigger a rally of the same size. RSI is treading sideways to signal consolidation, barely offering directional clues at the moment. 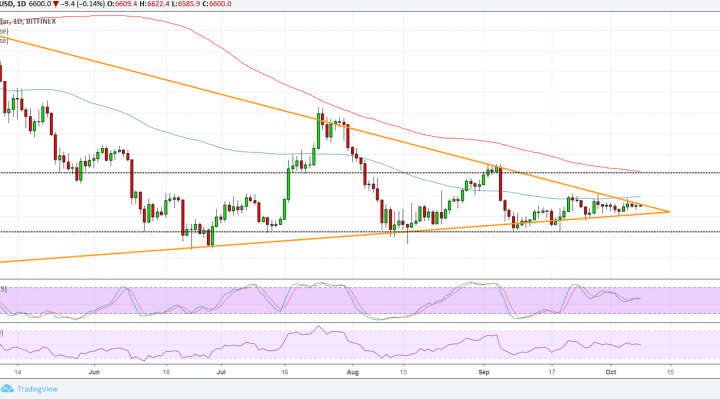 Fundamental market factors appear more supportive of bitcoin price gains, though. Investors are more or less optimistic thanks to the report from WTO highlighting the potential for cryptocurrencies to disrupt several industries, although it also highlighted downside risks like scalability.

Meanwhile traders are still wary of the pending bitcoin ETF applications with the SEC as rejection could still lead to a sharp drop. Then again, more and more analysts are calling a bottom on bitcoin prices, so factors could line up for a strong rebound before the year comes to a close.

US stock markets are starting to return some of their recent gains in anticipation of further tightening from the Fed. This has supported bond yields but could also transfer some of the flows to other higher-yielding assets like cryptocurrencies.