Bitcoin appears to have made a bullish breakout from an inverted head and shoulders or symmetrical triangle consolidation pattern. Either way, this signals that bullish pressure is picking up and could continue to lift the cryptocurrency from here.

However, the 100 SMA is still below the 200 SMA to signal that the path of least resistance is to the downside. In other words, the selloff is more likely to resume than to reverse. Then again, the gap between the moving averages is narrowing to signal weakening selling pressure and a possible bullish crossover.

Bitcoin has also moved past the 100 SMA dynamic inflection point to indicate that buyers are gaining a bit more traction. Price could test the 200 SMA dynamic resistance around $6,400 next, and a break higher could confirm that more buyers are hopping in.

RSI is already indicating overbought conditions, though, so there may be some profit-taking in order while buyers take a break. Stochastic is also turning lower so bitcoin could follow suit as sellers return. 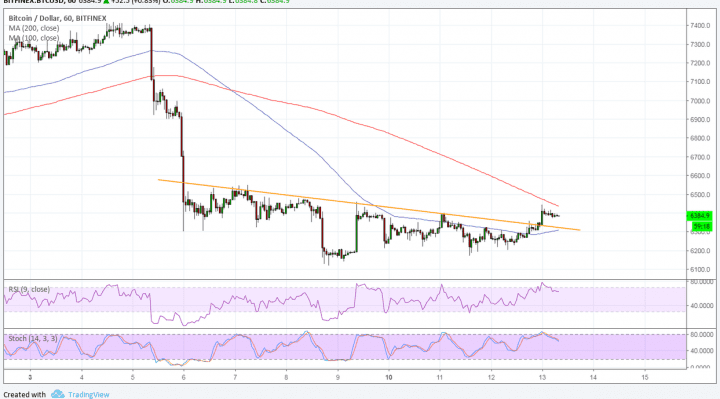 Traders seem to be getting a reprieve from the earlier slide, and it could be the general pickup in risk appetite over the past 24 hours. The US is reportedly inviting Chinese officials for another round of trade talks, possibly preventing further tariffs from being imposed and easing uncertainty in the global markets. This is encouraging traders to take on more risk and place bets on higher-yielding assets like stocks, commodities, and cryptocurrencies.

Bitcoin has been one of the first to take advantage of this news since its rising market dominance has rendered it a sort of safe-haven among its peers. With that, even with another round of declines in the industry, bitcoin might still be able to keep its head afloat. Investors are now turning their attention back to the SEC ruling on bitcoin ETF applications due later this month.