Bitcoin has formed higher lows and slightly higher highs to create a rising wedge pattern on its 1-hour time frame. Price is currently testing support and might be due for a move back to the top.

The 100 SMA is above the longer-term 200 SMA to indicate that the path of least resistance is to the upside. In other words, support is more likely to hold than to break. This could also mean that an upside break of the wedge might happen soon as the moving averages are holding as dynamic support levels, too.

RSI is still pointing down, though, so there may be some selling pressure left. Stochastic also has room to fall before hitting oversold levels, indicating that bearish momentum could stay in play for a bit longer. In that case, bitcoin could slide below the support area and fall by the same height as the chart formation. 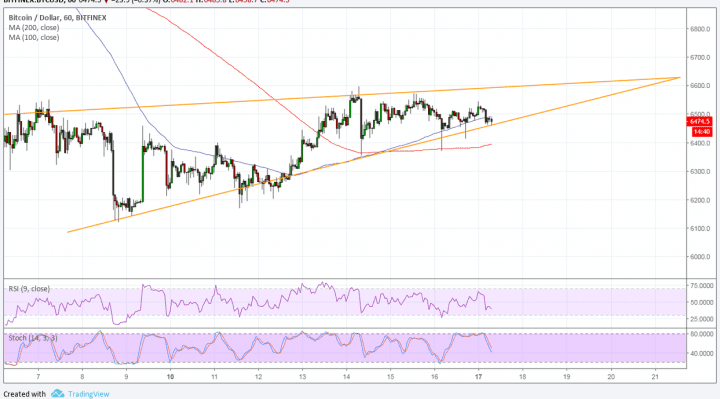 However, bitcoin seems to be starting the week off on the right foot as there have been no negative updates over the weekend. The earlier week even ended on a positive note as it a report suggested that the blockchain industry could add $1 trillion to global trade activity over the next ten years.

The spotlight also seems to be returning to institutional interest after it was reported that Morgan Stanley is looking into offering bitcoin swaps for its clients. This followed earlier report that Citigroup is also considering offering crypto-based instruments, overshadowing rumors that Goldman Sachs would ditch its plans to create a bitcoin trading desk.

With that, the next set of updates this week could determine whether the rebound has legs or not. Sustained interest in the institutional scene could keep lifting bitcoin higher while traders try to gauge if the SEC could rule in favor of bitcoin ETF applications later on.