Bitcoin is still stuck inside a descending triangle pattern on its 4-hour time frame and continues to test support. Price appears to be forming a small double bottom right at this level and might be due for a rally back to the top around $7,000.

However, the 100 SMA is below the longer-term 200 SMA on this time frame to signal that the path of least resistance is to the downside. In other words, support is more likely to break than to hold. If that happens, bitcoin could fall by the same height as the chart pattern, which spans $6,200 to $8,500.

RSI is heading higher, though, so bitcoin price might follow suit. This oscillator has some room to rise before indicating overbought conditions after all, so buyers could stay in control for a bit longer. Similarly stochastic has some room to climb before hitting overbought levels, so there’s enough bullish momentum to allow more gains.

A break past the short-term double bottom neckline around $6,600 could signal that a climb to the triangle top is in the works. The reversal pattern is around $500 tall so the resulting rally could be of the same size. 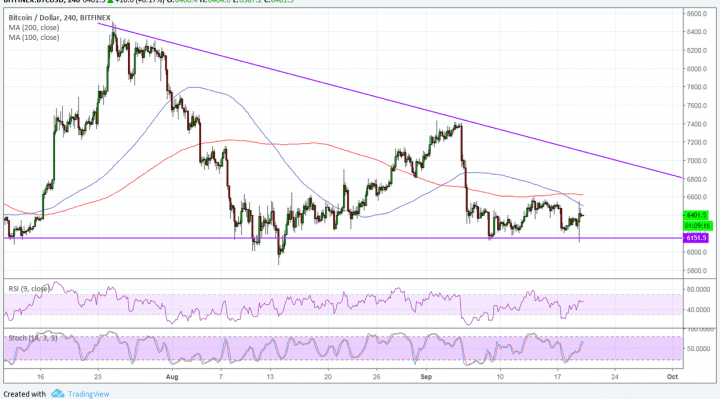 Traders are holding out for the SEC decision on the bitcoin ETF applications due in a few days, with the latest dip being attributed to a buildup of short positions leading to the ruling. Another rejection could mean a leg lower for bitcoin while approval could lead to strong gains, perhaps even a break above the triangle top and a resulting climb.

Note that bulls are also defending support levels quite well or that buyers have been loading up on their positions on dips. In any case, it looks like any downside might still be limited while upside could be greater. There have been some positive developments after all and there is support from the institutional side of things.