Bitcoin recently busted through resistance around $6,500 and hit a ceiling at $6,850. A pullback appears to be taking place and the Fibonacci retracement tool shows that the 38.2% to 50% levels line up with this area of interest.

The 50% Fib also lines up with the 200 SMA dynamic inflection point, which adds to its strength as support. A larger pullback could last until the 61.8% Fib at $6,400 but this might be the line in the sand for an uptrend.

Still, the 100 SMA is above the longer-term 200 SMA to confirm that the path of least resistance is to the upside. In other words, the uptrend is more likely to resume than to reverse. The gap between the moving averages is also widening to reflect stronger bullish momentum.

However, stochastic appears to be turning lower to suggest a return in selling pressure. RSI is also on the move down so bitcoin might follow suit since this indicates that selling pressure is returning. 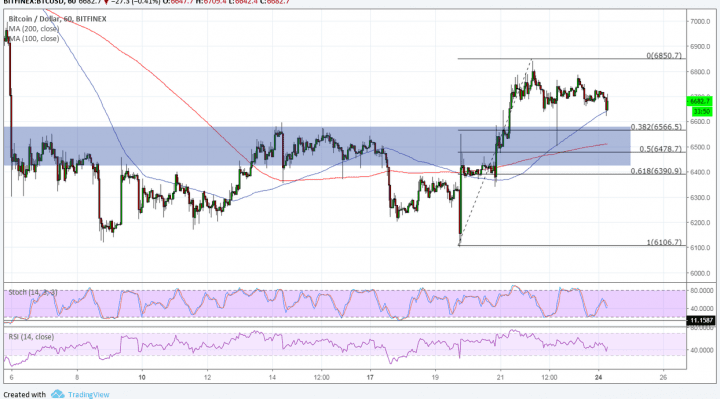 The SEC decision to postpone its ruling for the bitcoin ETF application from VanEck/SolidX appears to have been welcomed by market watchers since it wasn’t a flat-out rejection after all. The longer comment period suggests that the regulator needs more time and information to make its ruling, and an approval is still a possibility.

With that, bitcoin could keep grinding higher until the actual announcement is made as bulls might be reestablishing their positions so as to not miss any potentially strong rallies. After all, this announcement is still widely expected to be the catalyst for the much-anticipated bitcoin rebound before the end of the year.

Any indication that the regulator could approve the proposed rule change to list these ETFs on exchanges could revive expectations of stronger institutional and retail interest, which would then drive liquidity and activity.