Bitcoin was rejected on its attempt to break past the descending triangle resistance on the daily time frame. Price could be headed back to the triangle support around the $6,100 area from here.

Stochastic looks ready to turn lower from overbought levels, indicating a return in selling pressure. RSI is also turning lower so bitcoin might follow suit as sellers have the upper hand. Support might hold if both oscillators hit oversold levels and turn back up by the time that happens. 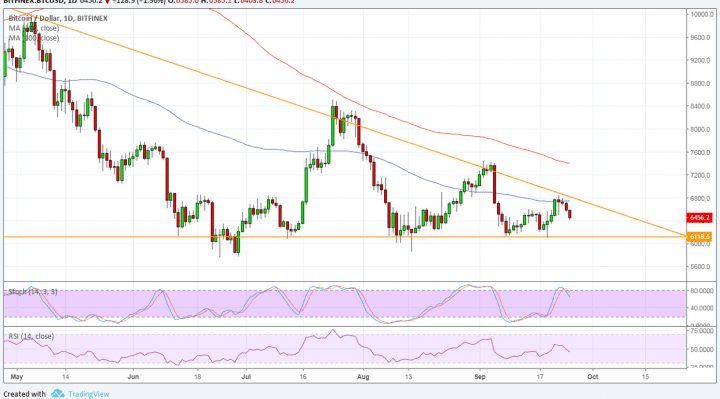 Bitcoin appears to be returning some of the gains from the previous week after the SEC announced its decision to open the comment period on the proposed rule change from VanEck/SolidX. This would allow their bitcoin ETF to be listed on an exchange, thereby becoming more accessible to institutions and retail investors and drawing more liquidity.

Traders might now be holding out for the actual decision from the regulator as approval is still being touted as a likely catalyst for a strong rebound to record highs before the end of the year. Apart from that, there appears to be a return in risk aversion in financial markets as traders are adjusting their positions to the tariffs coming into play from both the US and China.

Negotiations in NAFTA and Brexit talks also appear to hit roadblocks, leading uncertainty to return to financial markets and traders to let go some of their risk-on holdings, including cryptocurrencies.