Bitcoin could be ready to resume its climb as it gains traction on the bounce off the ascending channel on the 1-hour time frame. Price has made its way up to the mid-channel area of interest, which appears to have led to some profit-taking.

At the same time, price is hitting the dynamic resistance at the 200 SMA and might be due for another dip to the channel support around $6,400. The 100 SMA is still above the longer-term 200 SMA to signal that the path of least resistance is to the upside or that the uptrend is more likely to resume than to reverse. However, the gap between the indicators has narrowed enough to signal that a bearish crossover is imminent.

With that, there could be a chance of a channel breakdown, spurring a reversal from the ongoing uptrend. RSI is pointing down to also indicate that sellers might have the upper hand and could push for a downtrend.

Stochastic is pointing up, though, so there may still be some bullish momentum left. In that case, bitcoin could make its way to the next upside target at the 38.2% extension or the 61.8% level at the channel resistance and latest swing high. Stronger bullish momentum could take bitcoin up to the 78.6% extension at $6,930 or the full extension close to $7,100. 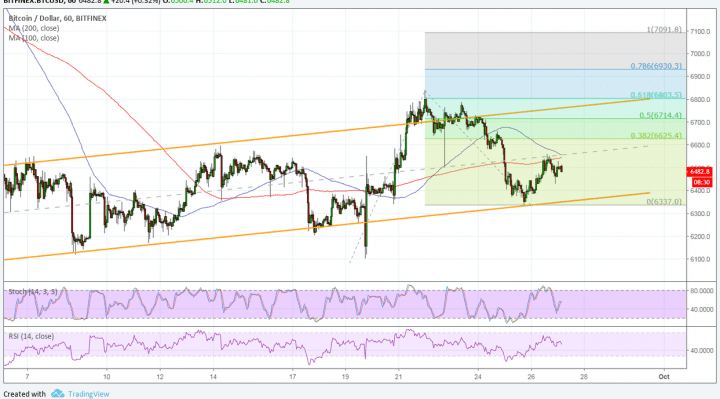 Bitcoin is trying to regain its footing and a slew of positive updates could help sustain the climb. Last week, the SEC refrained from rejecting bitcoin ETF applications and prolonged its comment period instead. Google will reportedly lift its ban on bitcoin and ICO ads by October, leading to revived interest among the general public.