Bitcoin is halfway through completing its double bottom on the 4-hour time frame as it made its way past the $7,000 level. This puts it closer to testing the neckline around the $8,400 level if the rally keeps up.

The 100 SMA is attempting to complete its bullish crossover from the longer-term 200 SMA to confirm that the path of least resistance is to the upside. In other words, the uptrend is more likely to resume than to reverse.

However, RSI looks ready to turn south so bitcoin price might follow suit. Stochastic is already on the move down to indicate that sellers are taking over while buyers take a break. This could still lead to a quick pullback before gaining more bullish traction on the move. Once price completes the double bottom and breaks past the neckline, a longer-term climb of the same height as the formation could ensue. 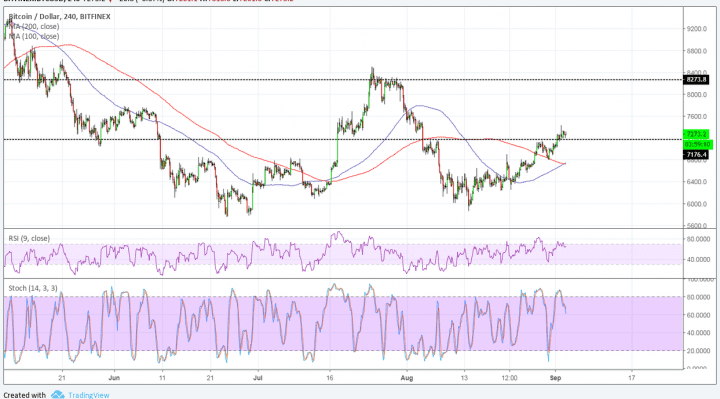 Bitcoin traders appear to be in a positive mood, which is characteristic to a new week and month. Perhaps more are starting to bank on revived forecasts of new highs by the end of the year, with the SEC still gearing up to announce their ruling on another batch of bitcoin ETF applications. It already decided to review their earlier rejection but did not specify when this period would end.

Meanwhile, there have been a handful of positive developments in other altcoins, buoying bitcoin just the same. In addition, the expected launch of ethereum futures by CBOE is even expected to prove bitcoin bullish while traders try to get in on bearish ethereum positions.

Nonetheless, the mood in the financial markets has also been relatively optimistic, possibly due to the developments in trade negotiations. Should this sentiment persist throughout the week, bitcoin could set its sights higher, but a return in risk-off moves could lead to big dips.