Bitcoin continues to trend higher inside its rising channel on the 1-hour time frame and is hovering close to the top. Price could be attempting to break past the resistance as it holds its head above the mid-channel area of interest.

For now, price is consolidating inside a small triangle pattern but could be due for a break higher to test the channel top around $7,500. The 100 SMA is above the longer-term 200 SMA to indicate that the path of least resistance is to the upside or that the uptrend is more likely to resume than to reverse. In addition, the 200 SMA lines up with the channel support at the $7,000 major psychological level, where more buyers might be waiting.

RSI is pointing up, though, which means that bullish momentum is in play. Stochastic has some room to head lower before hitting oversold levels, which means that sellers might have the upper hand for now. Turning back up could bring buying pressure in and lead to a move to the channel top or a break higher. 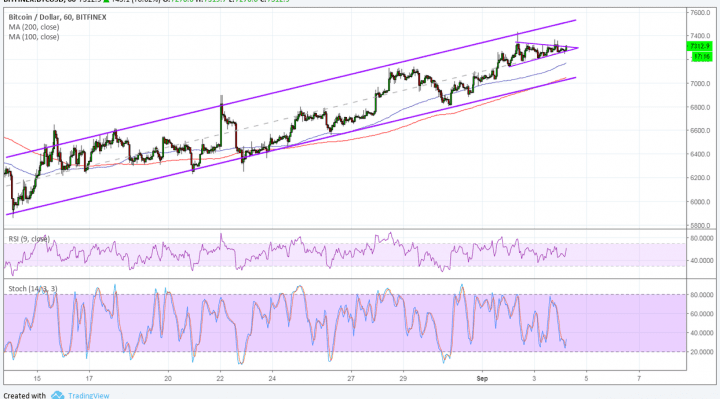 Bitcoin drew strong support from predictions by Satis Group that the cryptocurrency could hit $33K next year and $96K over the next five years. They were more bullish on Monero and slightly upbeat on litecoin and ethereum, too. On the other hand, they gave bearish forecasts for Ripple, Bitcoin Cash, and utility tokens.

However, traders still seem to be holding out for actual developments in the space, keeping a particularly close eye on SEC remarks concerning bitcoin ETF applications pending their ruling. Investors might have to wait until the end of September to get an actual decision, but pricing in ahead of any official announcements for fear of missing out on big moves might still keep prices propped up.