Bitcoin recently broke to the upside of its inverse head and shoulders pattern to show that a reversal from the selloff is taking place. This spans $6,000-$9,000 so the resulting rally could be of the same height, taking bitcoin to the $12,000 area of interest next.

The 100 SMA has crossed above the longer-term 200 SMA to confirm that the path of least resistance is to the upside. This suggests that the rally is more likely to continue.

However, stochastic is already indicating overbought conditions and looks ready to turn lower. Bitcoin price could follow suit and pull back to the broken neckline or the dynamic support at the moving averages. RSI is also in the overbought zone to show that buyers are feeling exhausted and may let sellers take over. 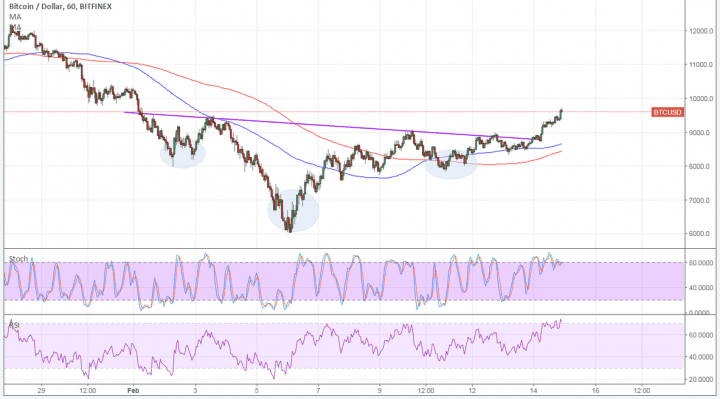 The mood in the cryptocurrency industry appears to have strongly improved after the Senate hearing in the US encouraging industry development in the midst of oversight. The South Korean government appears to have taken cue from this as an official remarked that the country is considering additional regulation similar to the “BitLicense” in New York.

“The government’s basic rule is to prevent any illegal acts or uncertainties regarding cryptocurrency trade, while eagerly nurturing blockchain technology,” Hong Nam-ki, minister of the Office for Government Policy Coordination said in a statement.

He also went on to say “We are positively considering the adoption of an exchange approval system as the additional regulation on cryptocurrencies. We are most likely benchmark the model of the State of New York that gives a selective permission.”

Apart from that, ECB head Draghi’s more open tone towards bitcoin in his latest video interview quashed fears of stricter regulation in the euro region as well. This was a change of pace compared to his earlier remarks warning the investing public against the cryptocurrency.

In the US, the chairmen of the SEC and CFTC shared that different federal agencies are trying to coordinate policy on cryptocurrencies as well.