Bitcoin suffered another wave lower but could be due for a bounce as it tests a confluence of support levels. Price is trending inside a falling channel on its short-term time frames and is currently at support.

This coincides with the ascending trend line visible on the daily time frame, connecting the lows since July last year. This could be the last chance for a major bounce back to the channel resistance around $10,000-12,000 as a break below the $6,000 mark could set off more losses.

The 100 SMA is above the longer-term 200 SMA on the daily time frame, though, so the path of least resistance is to the upside. This means that the rally could still resume. However, the gap looks ready to shrink between the two, reflecting a pickup in selling pressure. Also, it’s worth noting that price has fallen below the 200 SMA as an early bearish signal.

Stochastic is also heading lower to show that sellers have the upper hand. However, the oscillator is already dipping into oversold territory so a return in bullish pressure might be due. RSI has some room to fall but is also in the oversold region to reflect bearish exhaustion. 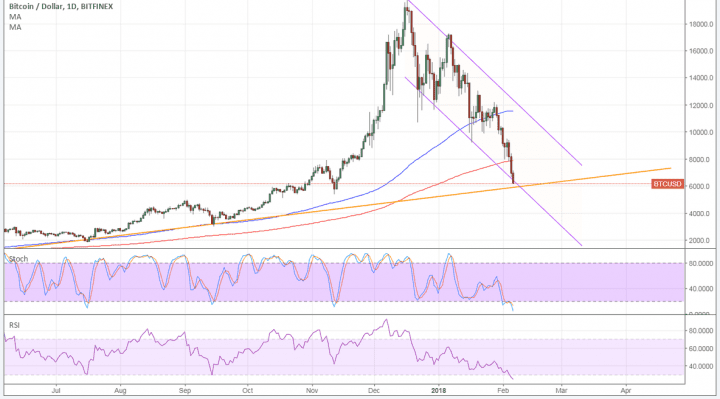 Bitcoin was among the riskier assets dragged down by the sharp selloff recently. During these instances, bitcoin usually takes advantage of the outflows from traditional markets like stocks and commodities but this time it wasn’t exempt.

Dollar strength also came into play on tightening expectations. Data was stronger than expected as the non-manufacturing PMI blew past consensus following the upside NFP surprise last week. This could be enough to keep the safe-haven dollar stronger against its peers as it holds on to fundamental support as well.

In contrast, bitcoin and other cryptocurrencies continue to be weighed down by increased scrutiny. In his speech in front of the European Parliament, central bank head Mario Draghi said that bitcoin is a risky asset and that their supervisory arm is already looking into the potential risks that could affect institutions.