Bitcoin bounced off the channel support on the 4-hour time frame as indicated in a previous article. This support area lines up with the 100 SMA dynamic support, which added to its strength as a floor. Applying the Fibonacci extension on this move reveals the next potential resistance levels.

The 100 SMA is above the longer-term 200 SMA on the 4-hour chart so the path of least resistance is to the upside. The gap is also getting wider, which means that bullish pressure is getting stronger. In other words, the uptrend is more likely to continue than to reverse.

Stochastic is already indicating overbought conditions, though, so buyers might want to take a break and let sellers take over from here. In that case, another test of the channel support around the 1200 level could be possible, especially if stochastic heads further south and draws more bears to the game. Meanwhile, RSI is still heading up so bitcoin could follow suit but is also closing in on the overbought region. 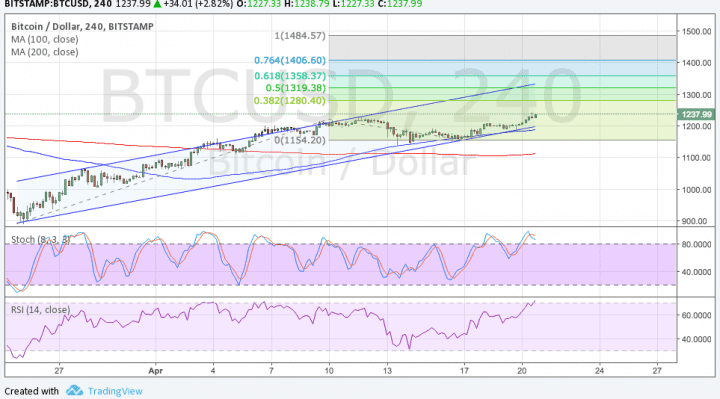 Recent events continue to keep risk-off vibes in place, particularly when it comes to geopolitical risks. The main event is likely to be the French elections over the weekend as a Le Pen victory could keep Frexit issues in place and threaten the stability of the shared currency, drawing more money to alternative assets like bitcoin. In addition, the shooting in Paris has also sent fresh jitters across the financial markets as some worried that it might be a terror attack or one that is election-related.

In the United Kingdom, Prime Minister May’s announcement of snap elections added to the uncertainty surrounding Brexit. This could lead to a different mood in negotiations, possibly making the bargaining stance of the UK more shaky and also leading to some bearishness in their market that would drive traders to bitcoin as well.