Bitcoin is still having a tough time breaking past the recent resistance levels, signaling that a correction may need to take place before new highs are created. A rising wedge formation can be seen on the 4-hour time frame and bitcoin could test support at the $3100 area before heading any higher.

The 100 SMA is safely above the longer-term 200 SMA so the path of least resistance is to the upside. The gap has also been steady so bullish pressure remains intact. A larger pullback could last until the 100 SMA dynamic support close to a broken resistance level at $3000 and the line in the sand for the uptrend would be the 200 SMA dynamic inflection point.

Stochastic is heading lower so sellers are still on top of their game. Stronger selling pressure could take bitcoin down for a break of the wedge consolidation and on a selloff of around $800 or the same height as the chart formation. RSI is also heading down and has enough room before hitting oversold conditions so selling pressure could be in play for a while. 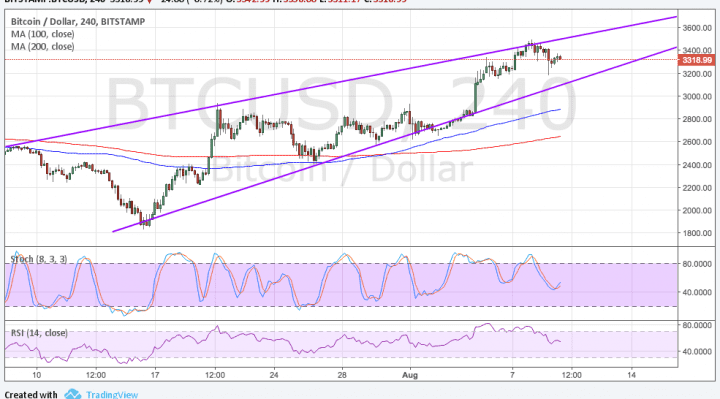 There are opposing factors influencing bitcoin price at the moment, one of which is the geopolitical risk coming from the situation with North Korea. There have been threats of a simultaneous missile firing on Guam, which is the nearby U.S. territory in the Pacific, and the U.S. government has shown no intention of backing down.

If the situation escalates, it could mean more gains for bitcoin as investors seek higher returns outside of traditional markets. At the same time, it could be bearish for the dollar since the threats are being aimed at the United States.

Bitcoin has also gained strong support after the recent network upgrade since this has allowed it to handle more transactions than before. The cryptocurrency seems to have survived the hard fork unscathed so investor interest is returning and could boost bitcoin to new record highs.

In any case, headlines related to North Korea could continue to influence overall sentiment and therefore bitcoin price. Stay on the lookout for a likely pickup in volatility as well.