Bitcoin recently sold off but is finding support at the ascending trend line visible on the 4-hour chart. Price looks ready to resume the climb and the Fibonacci extension levels show just how high it could go.

The 100 SMA is above the longer-term 200 SMA to confirm that the path of least resistance is to the upside. The 100 SMA also lines up with the rising trend line and has held as dynamic support. The gap between the moving averages is widening to reflect stronger bullish momentum, but a break below the trend line could still find a floor at the 200 SMA dynamic support at $3200.

Stochastic is moving up to show that bulls are on top of their game, but this oscillator is already dipping into overbought territory to signal rally exhaustion soon. RSI is also heading north so bitcoin might follow suit. 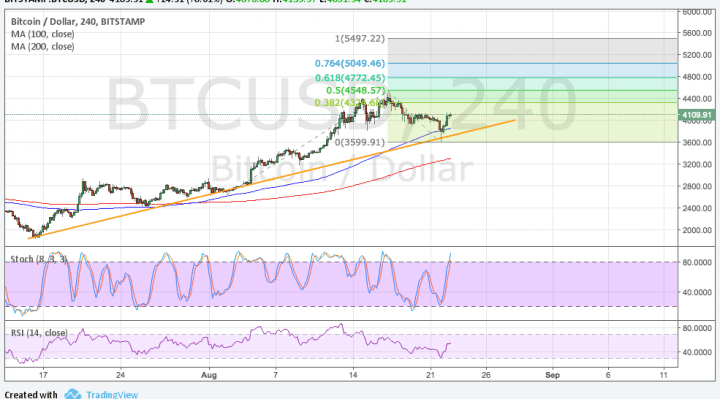 The bitcoin rally stalled earlier this week when news broke out that bitcoin cash has gained significantly more mining power. This means that it poses stiffer competition to the original version, reviving incompatibility concerns that may arise from the hard fork and complicate the upgrade to SegWit.

However, the cryptocurrency is also drawing support from the risk-off environment as investors seek higher returns in alternative assets outside of traditional stocks and commodities. The start of the joint military exercises between the US and South Korea has kept North Korea on edge, with one of its diplomats saying that the drills are “an aggressive war scenario to carry out pre-emptive strikes against the DPRK” and that it would “certainly add gasoline to the fire driving the current tense situation to further deterioration.”