Bitcoin price continues to tread higher and is now testing the channel resistance near the $1000 handle as predicted. This resistance area could spark some profit-taking ahead of today’s event risks and before the trading week comes to a close.

The 100 SMA just crossed above the longer-term 200 SMA on the 4-hour chart to confirm that the uptrend is likely to carry on than reverse. These moving averages are close to the ascending channel support at $950, adding to its strength as a potential floor in the event of a correction.

RSI is indicating overbought conditions, which means that bullish pressure is getting exhausted and traders might be keen to book their winnings at this psychological resistance level. Stochastic has also been showing overbought conditions for quite some time and once these oscillators turn lower, selling pressure could return and spur a pullback to the $950 area.

Stronger selling pressure could force a break below this area of interest onto the next floor at $900 then at $875. Of course this hinges mostly on how upcoming market catalysts turn out and what’s next for dollar price action. 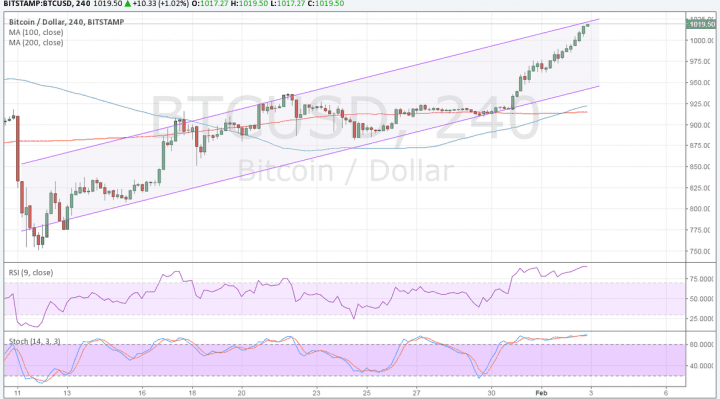 The NFP release is scheduled today and traders are projecting job gains of at least 170K. Earlier jobs reports have printed strong figures for January, leading many to set the bar higher and hope for at least 200K in hiring gains to reinforce Fed rate hike biases. In that case, the dollar could be poised for a solid comeback across the board, bringing BTCUSD down in the process.

On the other hand, bleak results could continue to dampen rate hike expectations and lead to more dollar losses. Keep in mind that the FOMC was not so hawkish in their latest policy statement, even as they removed a key phrase on the transitory impact of energy prices on inflation and highlighted the pickup in consumer and business sentiment, leading many to doubt that they can push through with three hikes this 2017.

To top it off, the recent actions by the Trump administration have been a cause for concern for some dollar bulls. For one, his Muslim immigration ban has sparked plenty of protests across the country and has led to speculations of increased violence, as well as worsening discord in Washington and the GOP. Latest updates indicated that Trump made a threat against Iran, further adding to global uncertainties and concerns about oil prices.

Still, some believe that the dollar could regain its luster against its counterparts once Trump gets started on tax reform and financial deregulation. Until then, uncertainty remains the dominant theme in the global markets on concerns about trade and foreign relations, leading investors to pursue returns in alternative assets like bitcoin versus stocks and currencies.