Bitcoin price is stuck in consolidation once more, trading inside a symmetrical triangle pattern on its short-term time frames. In the previous consolidation, price broke to the upside but had trouble sustaining its rally as price pulled back to the $1000 major psychological support before gaining more bullish momentum.

Price is now approaching the peak of the triangle formation so a breakout could happen fairly soon. The 100 SMA is above the longer-term 200 SMA for the time being so the path of least resistance is to the upside. Also, the short-term MA lines up with the triangle support and adds to its strength as a floor. A larger dip could still find support at the 200 SMA dynamic inflection point.

RSI seems to be on the move up so bitcoin price might follow suit. Once the oscillator hits the overbought zone and turns lower, sellers could return to the game and push for a downside break. Stochastic is already dipping into overbought territory, hinting at a potential exhaustion in the latest rally and a possible move lower.

A move past the $1030 resistance could be enough to confirm an upside break and a possible rally for BTCUSD while a candle closing below the $1020 support could indicate that a downtrend is brewing. The triangle spans $1000-1040 so the resulting breakout move could be of the same size. 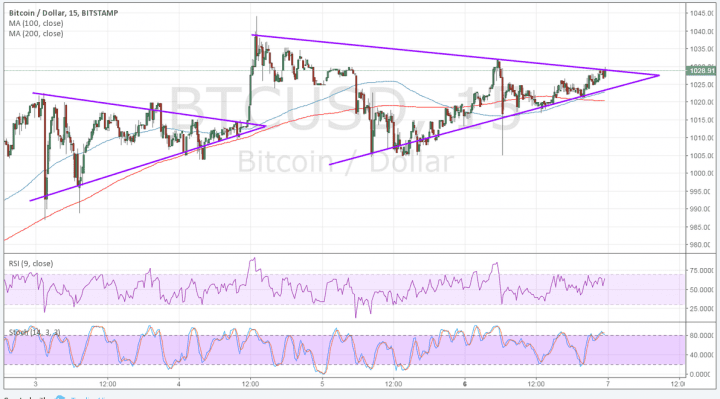 Demand for the dollar has been weaker recently but risk aversion still managed to prop the currency higher, on top of stronger expectations that the Fed could hike interest rates three times this year. Last week’s NFP release printed stronger than expected results while the Fed’s labor market conditions index showed a strong rebound from an upgraded 0.6 figure to 1.3. According to FOMC voting member Harker, March could be a contender for their next rate hike but he’d like to see stronger evidence of sustained growth and employment.

Still, uncertainty in the US remains, thanks to the recent moves by the Trump administration. Talks of financial deregulation could favor Wall Street, which might shore up risk appetite while still weighing on the safe-haven dollar and favoring higher-yielding assets like bitcoin. Aside from that, headlines on bitcoin trading restrictions in China seem to have taken the back seat as regulators seem to be happy with the latest measures introduced by exchanges, such as higher transaction fees and ceasing to offer margin accounts on bitcoin.

With that, technicals and fundamentals suggest that the path of least resistance for BTCUSD is to the upside, barring any major headwinds from the Chinese market. As always, US headlines could continue to exert a strong influence on market sentiment and dollar price action, but investors seem wary about putting funds in the dollar recently.