BTCUSD continues to soar up the charts and is on track towards testing the January highs around $1140. A break past this level could take it up to the all-time highs at $1165 and beyond.

The 100 SMA remains above the longer-term 200 SMA on the weekly time frame after that near-crossover, indicating that buyers are putting up a fight and inclined to push bitcoin price further north. The gap between the moving averages is getting wider again, which suggests that bullish momentum is picking up.

RSI has been on the move down but turned back up after reaching the middle, also reflecting a return in buying pressure. Similarly, stochastic is moving back up from middle ground to suggest that bulls aren’t done with the rallies just yet. Once these oscillators make a convincing drop from the overbought regions, though, profit-taking could ensue and allow bearish pressure to materialize. In that case, a potential pullback to nearby areas of interest at $900-1000 could be in the works. 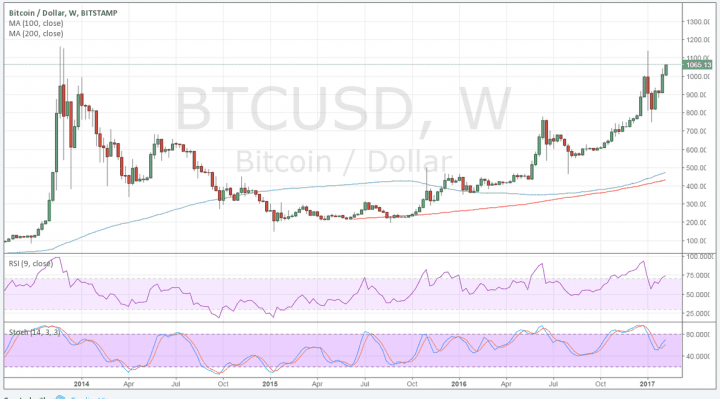 On the short-term time frames, it can be seen that bitcoin has broken past one continuation pattern after another and is also trading past an ascending channel resistance, reflecting a steeper climb. Three long green candles have formed on the 1-hour chart after the latest upside break.

On this time frame, the 100 SMA is also above the 200 SMA and lines up with a  nearby area of interest at $1030, which could also hold as support in the event of a quick pullback. RSI and stochastic are turning lower on this time frame so a brief correction might be possible.

Traders are still hesitant to put funds in the dollar even as data continues to reflect improvements and stock indices have been testing highs. Uncertainty surrounding the Trump administration has largely contributed to this phenomenon and traders appear to favor other assets instead.

The lack of regulatory news from China pertaining to bitcoin has also been a plus for the cryptocurrency these days. Recall that government investigations on bitcoin exchanges and clients in their effort to curb offshore investment and yuan speculative positioning has pulled BTCUSD back to the $750 area a few weeks back, but price has made a steady rebound as these concerns faded.

Moving forward, the lack of confidence in the US economy could keep traders bullish on bitcoin as long as Chinese officials refrain from pushing for additional regulations or more investigations on bitcoin trading activity in the mainland. Keep in mind that China is the largest market for bitcoin so any changes in volumes and liquidity in the country would have large repercussions on the entire market.