Bitcoin price sold off sharply upon testing the resistance of the ascending channel but also bounced from support. The uptrend remains intact as BTCUSD is back on track towards testing the channel resistance around $1075.

The 100 SMA is above the longer-term 200 SMA on the 1-hour time frame so the path of least resistance is to the upside. In addition, the short-term moving average lines up with the rising channel support, adding to its strength as a floor. The gap between the moving averages is getting narrower, hinting at a potential downward crossover later on. If that materializes, selling pressure could increase and trigger a downtrend for bitcoin.

RSI is on the move up to indicate that buyers are in control of bitcoin price action at the moment and that it could have enough momentum to move up to the resistance. If that area keeps gains in check, price could head back south to the $1040-1050 support. Stochastic is also on the move up but is already in the overbought zone, signaling exhaustion among buyers. Once the oscillators turn lower, bearish pressure could come into play. 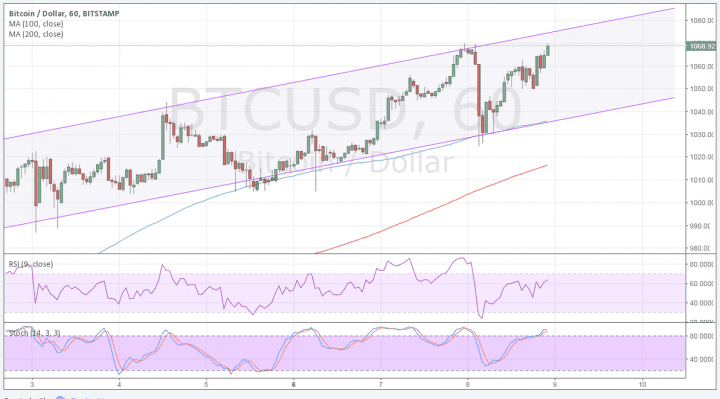 Headlines revealing that Chinese monetary authorities had a closed-door meeting with bitcoin exchange owners in the country sent price crashing lower as investors rushed to liquidate some of their long positions on fears that another set of restrictions might be introduced or penalties levied. Money laundering was the topic at hand so traders are still feeling uneasy about what might happen next.

Note that bitcoin activity in China comprises the largest chunk of the market, which means that any industry changes in the mainland would have large and lasting repercussions on price action and volumes. Earlier this year, several bitcoin firms were prompted to stop offering margin accounts on bitcoin and introduce higher transaction costs to curb trading activity. But once this issue was no longer in the headlines, traders reestablished their bullish positions and drove bitcoin up to its highs for the year.

So far, there have been no regulations announced but traders remain wary that some measures or client checks might be announced in the next few days. Strict regulations and potential penalties could lead to massive unwinding of long positions, which could prove long-term bitcoin bearish or put the cryptocurrency back in consolidation mode. On the other hand, the lack of any major announcements could allow bitcoin to carry on with its climb, possibly even making a run for the record highs.

This alternative asset is also drawing some support from ongoing uncertainty in the West, primarily in the US due to the Trump administration and looming Brexit negotiations in the UK and euro zone. Emerging markets are looking more stable with demand sustained in China and other nations in the Asia-Pacific region so risk appetite could drive price action barring any major industry changes.