Bitcoin price appears to be breaking out of the descending channel seen last week on the 1-hour time frame. This indicates that price could be ready for a reversal from its downtrend, provided it clears the nearby inflection points.

The 100 SMA is still below the 200 SMA so the path of least resistance is to the downside. In other words, the moving averages are suggesting that the selloff is more likely to resume than to reverse. However, if price closes above the 200 SMA dynamic inflection point at the $850 area, bitcoin price could be able to move higher, possibly until the channel top at $1000.

RSI is heading up so BTCUSD could follow suit but it is already approaching overbought levels, leading buyers to take profits and allow sellers to take control for the time being. If so, bitcoin could head back south to the channel support around the $600-650 levels. Stochastic is also in the overbought zone and appears ready to cross lower, hinting at a return in bearish pressure. 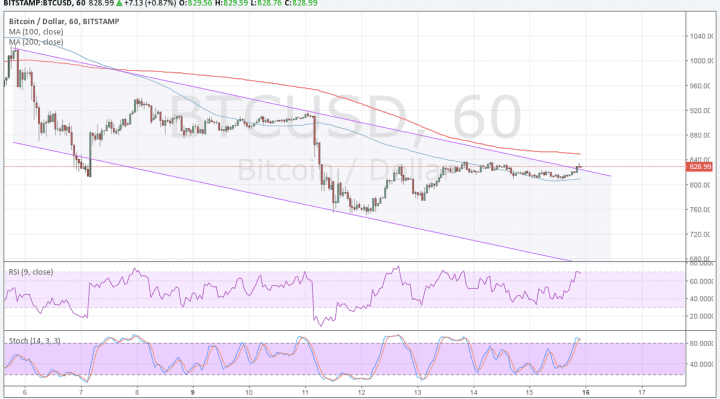 It can also be seen that bitcoin is testing the top of a small ascending triangle pattern, which formed since January 12. This adds to the strength of the resistance at current levels but would also be indicative of a strong surge in bullish pressure in the event of an upside break.

For now, traders all over the globe seem to be giving in to risk aversion, following the first press conference of U.S. President-elect Donald Trump. He is set to officially take office by the end of the week so all eyes and ears are on his inauguration on January 20, possibly leading to a lot of volatility for the dollar.

Apart from that, investors are also wary of the event risks stemming from the European region. In particular, Brexit issues are taking center stage, especially with U.K. Prime Minister Theresa May scheduled to talk about the government’s negotiation plans in a testimony midweek. Data from the U.K. should also have a strong impact on market sentiment, with increased uncertainty likely to draw more funds towards bitcoin and other cryptocurrencies.

Over in China, fears of stricter restrictions on bitcoin activity seem to have abated, although authorities continue to crack down on exchanges and clients. Data from the world’s second largest economy has failed to impress last week so it’s understandable that officials are doing everything in their power to ensure that domestic investments are supported and that trade activity remains strong, both of which involve restricting offshore investments and speculative yuan trading.

Experts have continued to emphasize how it would be nearly impossible for monetary authorities and government officials to expose identities involved in bitcoin transactions, lending some support for the cryptocurrency in the past few days. Still, any headlines indicating that China is taking a hardline stance against bitcoin could push price on another wave lower. On the other hand, more focus on dollar declines leading up to the Trump administration could be beneficial for bitcoin price.