Bitcoin has gained further traction heading north, as it broke above the ascending triangle resistance around $825. Price is testing the top of the ascending channel visible on the 1-hour time frame and might be due for a correction levels on the same chart.

Applying the Fibonacci retracement tool on the latest swing high and low shows that the 61.8% level is closest to the channel support around $860. A bounce off this area could be enough to send BTCUSD back up to the swing high at $916 or onto the channel resistance around $920-925.

The 100 SMA is crossing above the longer-term 200 SMA to confirm that the path of least resistance is to the upside. If this crossover is completed, more bulls could join the fold and possibly lead to a shallow pullback. A larger retracement, on the other hand, could find support at the moving averages dynamic inflection points closer to $840 and the former resistance area. 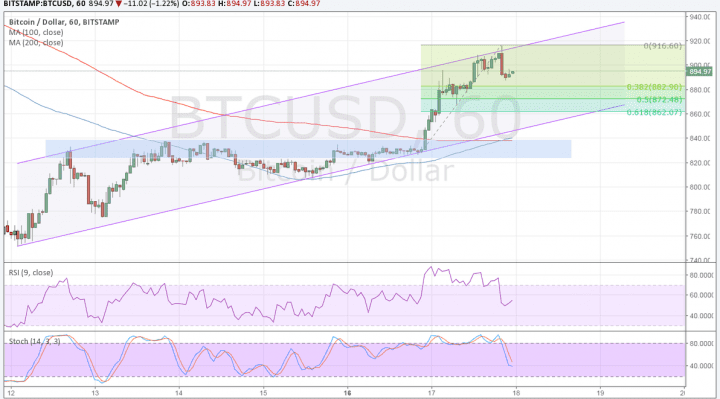 RSI is still moving down, which means that bears are still in control of BTCUSD movement for the time being. Similarly, stochastic is also heading south so bitcoin price could follow suit and carry on with the pullback. Both oscillators are approaching oversold conditions, though, so bullish pressure could return sooner or later. If not, a break below the confluence around $840 could be enough to suggest that a downtrend is in order.

Dollar weakness has been in play for the past few days as traders are starting to consider potential headwinds from Trump’s leadership. However, this has been observed leading up to the elections last year only to see stocks and US assets rally in the days that followed. A similar scenario could be in play this time so there’s still a chance for the dollar to make a strong advance against bitcoin, possibly by next week.

On the other hand, focusing on global uncertainties could shore up demand for bitcoin, especially since the possibility of a “hard Brexit” has been confirmed by UK Prime Minister May. Giving up access to the single market would have repercussions not just on the British economy but on the rest of Europe as well, so traders might be hard-pressed to seek returns in alternative assets like bitcoin instead of stocks or bonds.

Also, reports of Chinese government crackdowns on bitcoin exchanges and clients seem to have taken the backseat to other headlines these days. So far, there has been no news of additional restrictions or a full-on bitcoin ban being imposed so investors might be slowly reestablishing their long positions. In any case, stay on the lookout for more developments in this regard since China represents the largest market for bitcoin. As such, any downturn in bitcoin-buying in the mainland could lead to another significant drop in price.