BTCUSD continues to tread inside its short-term bullish channel and has recently bounced off support. However, price is encountering a roadblock visible on the 4-hour chart.

Bitcoin is currently trading around an area of interest or former support/resistance around $925-950 and this might keep longer-term gains in check. Price has yet to break past this area around the top of the channel to confirm that bullish pressure is gaining traction.

The 100 SMA is closing in on the longer-term 200 SMA for a potential downward crossover. If this materializes, bearish pressure could pick up and trigger another test or perhaps a breakdown of the channel support at $850. From there, bitcoin price could head back down to the channel lows at $760 or lower.

On the other hand, a break above the channel resistance and moving averages dynamic inflection points could draw more buyers to the fold, possibly pushing bitcoin up to the next area of interest at $1000. Stronger buying momentum could even take it back up to the $1135 highs and beyond, but it would take a really strong market catalyst to set that in action. 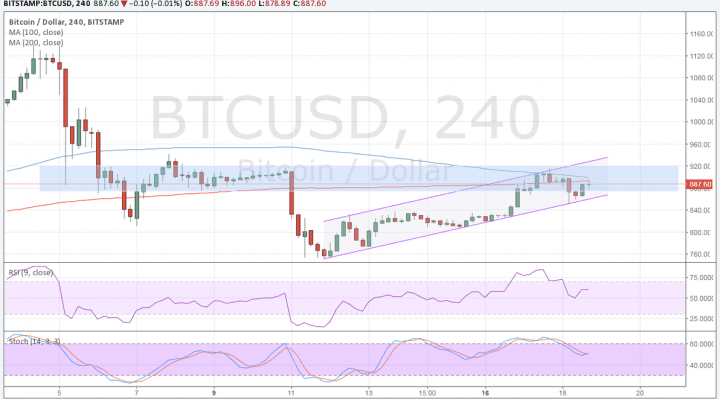 Looking ahead, the main market mover in the coming days could be the inauguration of US President-elect Trump. This could inspire a frenzy of profit-taking leading up to the actual event as traders seek to minimize their exposure. However, the aftermath could be similar to that of the actual US elections wherein confidence in the US economy and the administration’s fiscal policy plans sparked consecutive gains for US assets and a bit of weakness in bitcoin.

Another factor that could keep a lid on bitcoin gains is the ongoing crackdown by Chinese authorities on exchanges and clients. Recent reports indicated that the Chinese central bank released its findings and centered on three exchanges for operating outside of anti-money laundering rules. Analysts have downplayed this news and its potential impact on bitcoin activity in the mainland, but investors remain wary that authorities could introduce restrictive measures or impose penalties on the bitcoin firms involved.

In terms of these market risks, the path of least resistance for BTCUSD seems to the downside for now as it would require a strong pickup in confidence before investors increase their bitcoin holdings. Besides, the US dollar is also strongly supported by speculations of another Fed interest rate hike before the end of this quarter or at the start of the next. FOMC head Yellen explained that it would make sense to gradually tighten monetary policy instead of putting the central bank in a position wherein it needs to hike aggressively, thereby increasing the risk of a recession.

Longer-term risks for the dollar and overall market sentiment seem to be centered on the Trump administration’s actual fiscal policy changes. If these turn out positive for the US economy, demand for the dollar could outweigh bitcoin price gains, especially if Chinese authorities continue their efforts to curb bitcoin activity in the country.