Bitcoin seems to be having a tough time heading further north as price broke below the rising wedge support on the 4-hour chart. In addition, technical indicators are hinting that a move lower is in the cards.

The 100 SMA crossed below the longer-term 200 SMA on this time frame, signaling that the path of least resistance is to the downside. For now, the 200 SMA appears to be holding as dynamic support but a break below this inflection point could lay the track for further losses.

RSI is heading south so BTCUSD might follow suit, taking price down by around the same height as the wedge formation. This could bring it to the lows around $750 or lower, depending on the strength of bearish pressure. Stochastic is also moving down to confirm that sellers are taking control of price action.

Still, if buyers make another push higher, price could head up to the next area of interest at $1000, wherein plenty of take-profit orders are likely to be located. More bullish momentum past this point could pave the way for another move towards the $1150 highs, although this might be a low likelihood scenario. 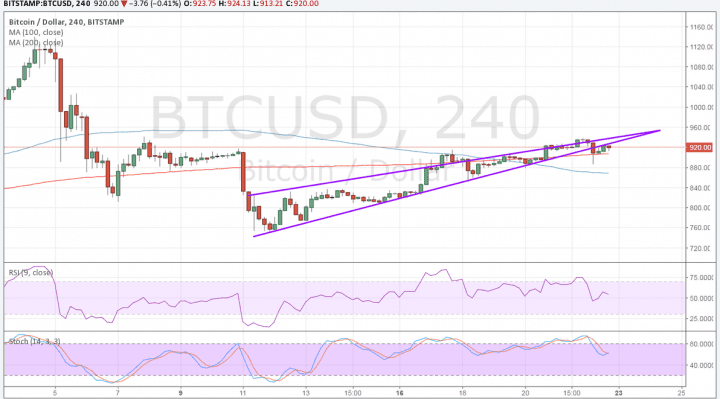 So far, dollar weakness has allowed bitcoin price to hold on to some of its gains and make a quick bounce. This follows Trump’s presidential inauguration, which did very little to calm investor jitters in the US market. Traders are worried about fiscal policy plans falling short or any trade repercussions from renegotiating NAFTA with Canada and Mexico. Later on in the week, US advanced GDP data for the fourth quarter of 2016 is up for release and strong results could ease investor fears for the time being, renewing demand for the US currency on stronger expectations of interest rate hikes later on in the year.

Meanwhile, slower bitcoin activity in China has weighed on the cryptocurrency’s gains and hurt investor confidence. Last week, a couple of bitcoin exchanges announced that they would cease offering margin accounts on bitcoin since this would magnify the risks involved in cryptocurrency trading. This is expected to be followed by similar action from smaller platforms, discouraging clients from opening new accounts and from taking on more bitcoin setups.

With that, lower volatility could be seen for bitcoin in the coming days, leading to a lot of consolidation unless a major market catalyst pushes it in a clear direction. Given the headwinds in China’s bitcoin activity, the path of least resistance seems to be to the downside as traders might keep booking profits off their earlier long positions instead of adding to them. Authorities are still cracking down on bitcoin clients, although experts have clarified that it would be nearly impossible to expose identities and impose penalties on individuals. Either way, increased scrutiny and persistent fears of more restrictions in the mainland could limit bitcoin rallies for now.