Bitcoin price is starting to trade inside a descending channel on its 1-hour chart and is gearing up for a test of resistance. This lines up with the 200 SMA dynamic inflection point, which could cap price gains.

The 100 SMA is above the longer-term 200 SMA for now so the path of least resistance is to the upside, but the gap is narrowing so a downward crossover could take place soon. If that happens, selling pressure could strengthen and push BTCUSD back down to the channel support around $870.

RSI is turning lower to indicate a return in selling pressure even without reaching the overbought territory. However, the oscillator could still move back up for an actual test of the $900 level before heading further south. After all, this area lines up with a former support level as well.

Stochastic is moving south from the overbought zone, with a slight bearish divergence. Price formed lower highs since January 24 while the oscillator made higher highs. This adds confirmation that bearish pressure is getting stronger, possibly even allowing sellers to push for a break below the channel support. In that case, a sharper selloff could ensue. 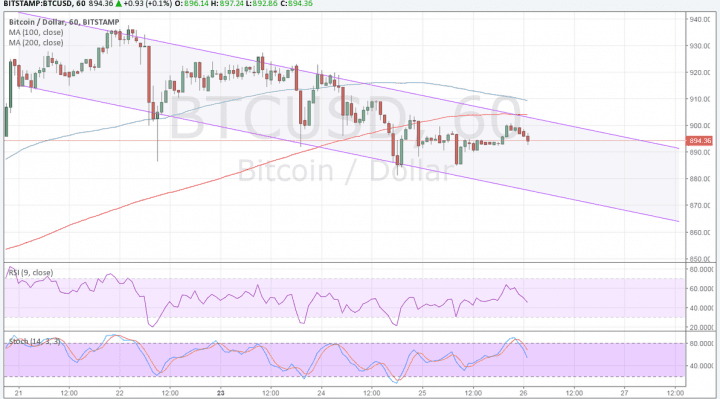 The cryptocurrency remains under heavy selling pressure as regulators in China continue to crack down on trading platforms. Earlier in the month, a couple of major exchanges announced that they would no longer offer margin accounts on bitcoin. After this, several firms also announced that they’d be charging higher fees on transactions to keep liquidity in check. This led many to speculate that bitcoin exchanges had been forced to introduce restrictions in order to be compliant with regulation, leaving investors wary that further measures might be put in place.

Authorities continue to look into bitcoin transactions so traders are also anxious of potential penalties or taxes on their own holdings. By the looks of it, traders are slowly liquidating their positions so as to not be under the officials’ radar. Apart from that, new transactions or accounts are also being limited.

Meanwhile, demand for US assets has picked up after stock indices reached record highs recently. This was spurred by Trump’s first few executive orders, which reinforced his view of putting America first. His team has reportedly compiled a list of infrastructure projects to prioritize, complete with estimated costs, additional employment, and funding status. These are expected to be positive for corporate America, on top of his proposed tax reforms. Equity gains were also sustained thanks to upbeat earnings data.

Although the dollar has yet to benefit from this rally in US equities, it seems that the currency is able to hold its ground against bitcoin, which is currently facing a downbeat outlook on stricter regulation in China. It may take long before confidence in bitcoin is restored so the cryptocurrency could keep creeping lower from here.