Bitcoin has formed lower highs and higher lows, creating a symmetrical triangle on its 1-hour chart. Price is currently testing support and seems ready for another test of resistance. An upside breakout could push BTCUSD back on its longer-term uptrend while a downside break could trigger a downtrend.

The 100 SMA crossed above the 200 SMA to suggest that the path of least resistance is to the upside. This means that a break higher is more likely to happen than a breakdown. RSI is moving up so bitcoin could follow suit while stochastic is making its way out of the oversold region to show that buyers are on top of their game as well.

The levels to watch are $920 and $910. A break past the $920 mark could be enough to confirm that bulls are charging and that a move up to the next ceiling at $935 could be in the cards. On the other hand, a long red candle closing below $910 could be enough to show a bearish breakout and clear the path for a selloff to the $885-900 lows. 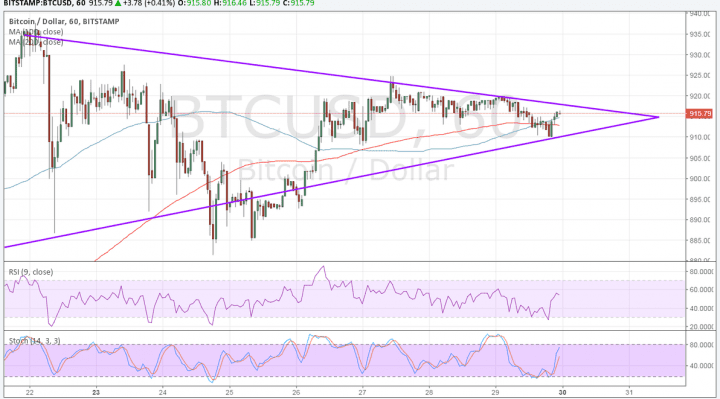 In terms of market sentiment, a downside move seems more likely. After all, the ongoing investigations in China’s bitcoin market are keeping investors wary of additional regulation that could further curb trading activity in the mainland. Keep in mind that China is the largest bitcoin market in the world so any restrictions could have a material effect on price.

For now, BTCUSD is able to stay afloat as investors are steering clear of the US dollar as well. Uncertainty surrounding the Trump administration has kept the currency’s gains limited even as stock markets have been climbing in hopes of additional fiscal spending. Still, speculations of a trade war and geopolitical tensions have dampened demand for the dollar.

A couple of major events are on the economic calendar this week, namely the FOMC statement and the US NFP release. Last week’s flash GDP reading for Q4 turned out to be a disappointment, casting doubt that the Fed can push through with its plan to hike rates three times this year. The FOMC statement could provide more clues on how the central bank is aligning with the Trump administration while the NFP report could provide a backdrop of economic progress.

Analysts are expecting to see a 176K increase in hiring for January, up from December’s jobs figure. Still, revisions to previous data and the trend in average earnings are likely to have a say in the dollar’s reaction as well. Weak figures could undermine the Fed’s hawkish stance and signal a slower pace of tightening while upbeat results could reinforce the view that a March Fed rate hike is in order. Either way, additional volatility is to be expected for these upcoming market catalysts.

As always, developments in China’s bitcoin market are likely to have a strong impact on direction as more news of restrictions from exchanges could trigger additional profit-taking activity.