BTCUSD is consolidating inside a descending triangle pattern visible on its daily and 4-hour charts. Price is testing support at the moment and might be due for a bounce back to resistance.

The 100 SMA is above the longer-term 200 SMA so the path of least resistance is to the upside. In other words, a bounce or a break higher could be more likely to happen than a move lower. Note that the triangle spans $2300 to $3000 so the resulting move could be around $700.

A break below support could lead to a drop to the next area of interest at $1850 or until the 100 SMA dynamic inflection point that lines up with the $2000 major psychological level where plenty of orders are likely located. A move higher could lead to a test of the all-time highs or the creation of new ones. 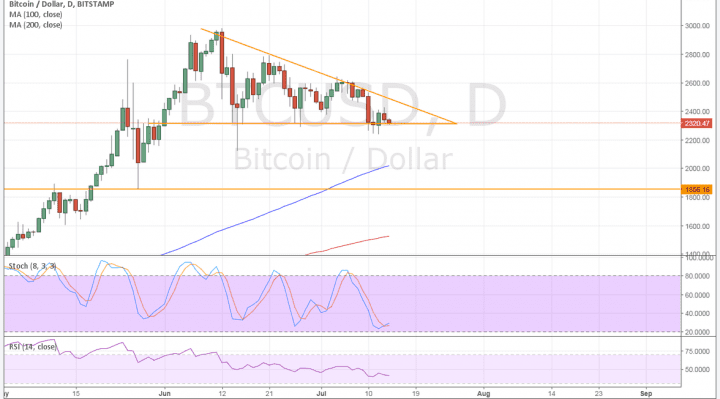 Stochastic is crossing higher without even reaching oversold levels. This signals that buyers are eager to regain control of bitcoin action, potentially leading to at least a bounce up to the triangle resistance at $2500.

RSI, on the other hand, seems to be edging lower to indicate that there’s some bearish momentum left. But once this oscillator hits oversold conditions and turns higher, bulls could get stronger.

There have been reports that a Swiss private bank called Falcon has included bitcoin in its asset management offerings. This has been approved by Swiss regulators, lending some support for the cryptocurrency’s legitimacy and potentially drawing more investor interest. Recall that Japan’s decision to accept bitcoin as a legal form of payment earlier this year was one of the main factors that fueled its sharp climb.

Still, it’s also worth noting that a number of analysts have talked about a bitcoin bubble recently and how it is supported by pure speculation. At the same time, the dollar could be poised for stronger gains down the line as traders eye the Fed’s balance sheet runoff and next interest rate hike.