Bitcoin price got a strong boost recently and is currently testing its record highs near the $3000 mark. A bit of a pullback could happen from here, though, as buyers wait to get in at cheaper levels.

Applying the Fibonacci retracement tool on the swing low last week to the latest swing high shows that the 50% level is close to a long-term area of interest around $2400. A smaller correction could last until the 38.2% Fibonacci retracement level to the rising trend line and a larger pullback could find support at the 61.8% Fib near the moving averages.

The 100 SMA has just crossed above the longer-term 200 SMA to confirm that the path of least resistance is to the upside. In other words, the rally is more likely to continue than to reverse.

Stochastic is heading down for now so bitcoin might follow suit and carry on with its correction to nearby support levels. RSI is also turning lower from overbought levels to signal profit-taking and a potential return in selling momentum. Once both oscillators reach oversold levels and turn higher, buying pressure could return. However, if bears are strong enough, they could still push for a break below the Fibs and allow the longer-term selloff to resume. 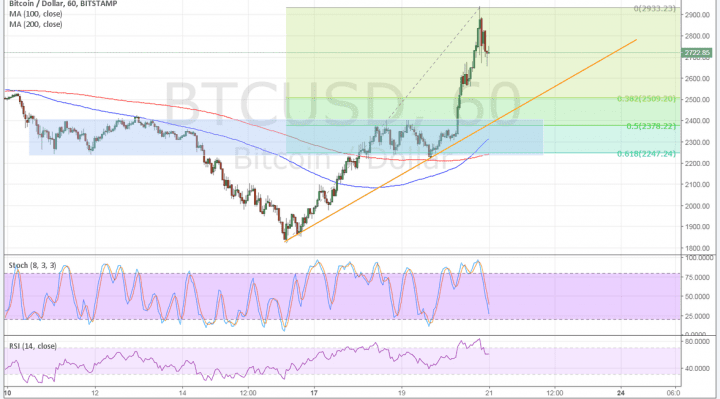 Market factors strongly favor more bitcoin gains versus the dollar, though, as the latter is being weighed down by political troubles. For one, the Trump administration continues to encounter several headwinds in its fiscal reform agenda, latest of which is the failure to push the Obamacare repeal in Senate. This led market participants to scale back expectations on tax cuts happening anytime soon.

As for bitcoin, reports indicating that BIP 91 has been locked in revived confidence that hard fork issues could be avoided as the network scales up. Note that there is still nearly a year’s worth of grace period, though, before the changes are completed.