Bitcoin is still consolidating below its all-time highs but a bullish flag can be seen, signaling that further gains are in the cards. Applying the Fibonacci extension tool shows how high BTC/USD could go if it breaks out of consolidation.

The 100 SMA is above the longer-term 200 SMA to confirm that the path of least resistance is to the upside. In other words, the rally is more likely to resume than to reverse. The gap between the moving averages is getting wider to reflect strengthening bullish momentum.

However, stochastic is already indicating overbought conditions to show that buyers are tired and might let sellers take over as they book profits. RSI is on the move up so bitcoin might follow suit as there’s still some bullish pressure left in play. 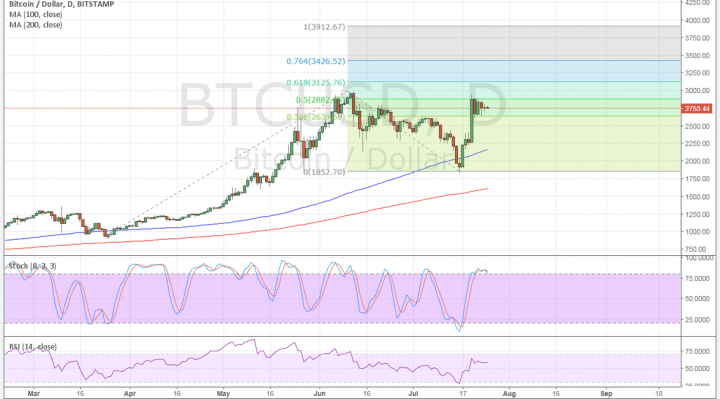 The cryptocurrency got a strong boost last week when BIP 91 was locked in. This marks a step towards the upgrade to SegWit2x, which would further reduce hard fork concerns. However, the dollar is also drawing support from expectations of a hawkish Fed statement.

While some are expecting the central bank to scale down its upbeat tone on account of weak CPI and retail sales for June, reiterating their plans to hike rates one more time before the year ends and to start their balance sheet runoff as well would lead to more gains for the dollar.

On the other hand, more cautious remarks from the FOMC this week would lead to lower expectations of a rate hike for September or December, thereby forcing the dollar to return some of its recent gains. This could spur stronger gains for BTC/USD as traders search for higher returns. Keep in mind that the US currency is also being bogged down by the slow pace of fiscal reform in Washington.