Bitcoin got rejected on its test of the $2950 highs, putting it back on track towards dropping to the range support at $1850. A near-term floor is also located at $2300-2400, as this lines up with the middle of the range.

The 100 SMA is still above the longer-term 200 SMA on the daily time frame so the path of least resistance is to the upside. The 100 SMA could also act as dynamic support around the $2200 level.

Stochastic is on the move down to confirm that selling pressure is in play. RSI is also heading lower so bitcoin might follow suit. Both oscillators have significant room to head down before hitting oversold levels so sellers could stay on top of their game for quite some time. Stronger selling pressure might even spur a break of the $1850 support and trigger a steeper fall for bitcoin. 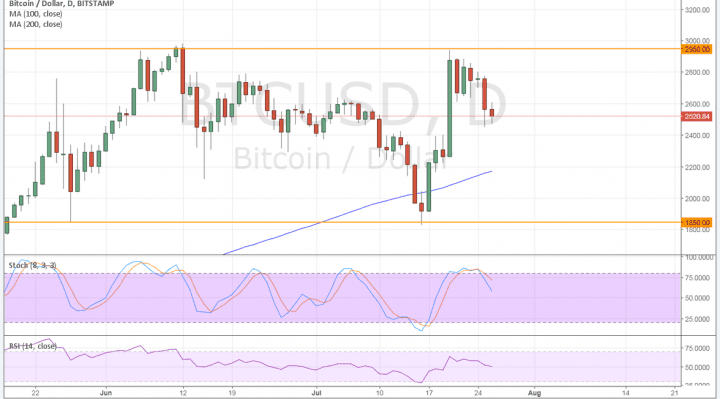 However, the cryptocurrency is likely to stay supported due to the BIP lock-in, which marks the start of the upgrade to SegWit2x. This would avoid a split to two versions of bitcoin, which is what many are referring to as a hard fork, that would give rise to incompatibility issues. Avoiding this could render bitcoin more stable against its peers and shore up long-term demand.

For now, the dollar is also enjoying strong support from the Senate vote to open the healthcare bill debate. This would give room to amendments before the final version is passed instead of scrapping the repeal idea completely. This also revived hopes that the Trump administration could make progress in its fiscal reform agenda, which includes tax cuts that would be positive for US companies and therefore the dollar.

At the same time, the prospect of monetary tightening continues to make the dollar appealing against its rivals. The FOMC statement is expected to reaffirm this hawkish stance as they shed more light on their next rate hike plans and the timing of the balance sheet runoff.