Bitcoin paused from its drop after breaking below a short-term consolidation pattern as it tests an area of interest. The $2400-2500 area is around the middle of the current range and a bounce could still take bitcoin back to the recent highs.

On the other hand, a break lower could clear the way for a test of the next floor closer to $1800-1850 and a move below this area could mark the start of a longer-term downtrend. However, the moving averages appear to be holding as dynamic support levels around $2400 for now and could continue to keep losses in check.

In addition, stochastic is pulling up from the oversold area to signal a return in buying momentum. RSI is still heading south, though, so there’s some selling pressure left. Once it hits the oversold level and turns higher, more bulls could defend the floor for bitcoin. 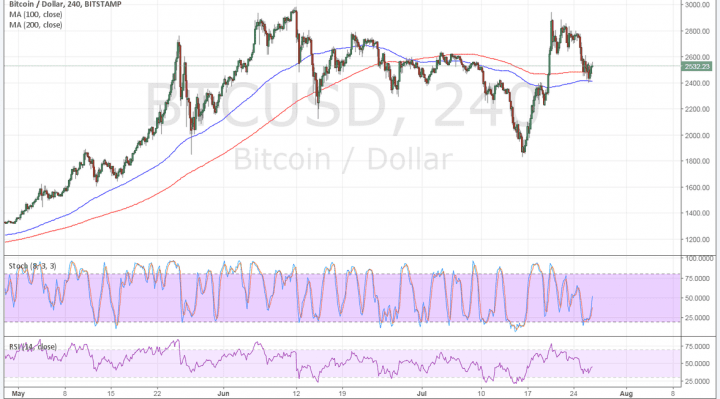 Enthusiasm for the BIP 91 lock-in last week faded after some developers are still pushing for other software alternatives like Bitcoin Cash. This could weigh on acceptance for the version that would supposedly make the upgrade to SegWit go smoothly, keeping hard fork concerns in play. The moment of truth is on August 1.

What’s keeping bitcoin from falling further to the dollar is the latter’s weakness after the FOMC statement. As it turned out, the US central bank wasn’t as hawkish and confident about inflation and tightening prospects. They did mention that they would start the balance sheet runoff “relatively soon” but this wasn’t convincing enough for dollar bulls.

A bit of a downgrade on their inflation assessment was also noted as they changed some of their language to signal that the dip in price levels was not as transitory as they previously mentioned. On the upside, policymakers acknowledged that risks remain roughly balanced and that job gains have been solid.

Still, the lack of strong market factors pushing either bitcoin or the dollar in a particular direction kept BTCUSD treading sideways for the time being and a breakout off this short-term consolidation could have clues on where it’s headed next.