Bitcoin is still moving mostly sideways for yet another day but it seems to be in the middle of a correction from a climb. Price is moving inside a short-term ascending channel visible on the 1-hour time frame and might be due for a test of support soon.

Applying the Fibonacci retracement tool on the latest swing low and high on this time frame shows that bitcoin already bounced off the 38.2% level but has yet to show upside momentum to test resistance. This means that the correction isn’t over yet and that another pullback to the Fibs might be possible.

The 100 SMA is holding as dynamic support at the moment, though, and is above the longer-term 200 SMA to confirm that the path of least resistance is to the upside. In other words, the uptrend is more likely to resume than to reverse. Still, a larger pullback could last until the 50% Fib at $2520 or the 61.8% Fib at $2480. A break below these levels could indicate that a selloff is underway. 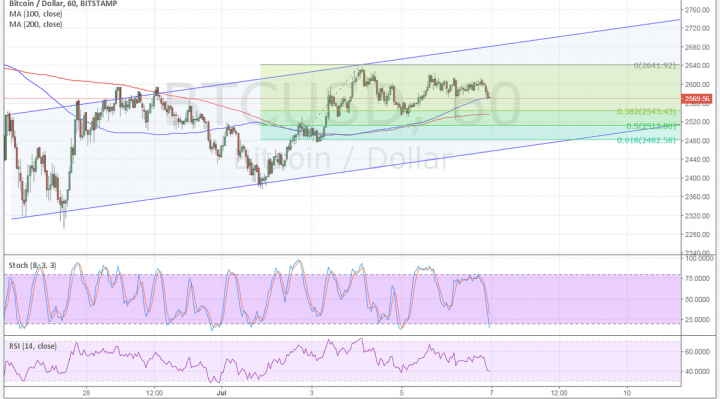 Stochastic is still pointing down to indicate that sellers are in control of bitcoin price action. RSI is also moving south so bitcoin might follow suit. However, the former is nearing oversold conditions already, which means that sellers might want to take a break and let buyers take over. If so, another test of the highs at $2640 or the resistance closer to $2700 could take place.

The dollar has weakened against its counterparts during recent trading sessions as jobs indicators are hinting at a weak NFP result. If so, dollar selling could intensify as traders start doubting that the Fed would be able to hike rates one more time before the year ends. On the other hand, strong NFP data could reinforce September tightening forecasts and lead to a strong rally for the dollar against bitcoin. Analysts are expecting to see a 175K increase in hiring and any revisions to previous reports could also be factored in the dollar’s reaction.