Bitcoin has just broken below its rising wedge support around $2900 to signal that further losses are in the cards. This chart pattern is around $1000 tall so the resulting selloff could be of the same size.

However, zooming out further back shows that bitcoin is still safely above the long-term rising trend line connecting the lows since last month. In addition, the 100 SMA appears to be holding as dynamic support for now and is above the longer-term 200 SMA to signal that the path of least resistance is to the upside. Meanwhile, the 200 SMA coincides with the rising trend line support around $2400.

Stochastic is heading south so bitcoin price might follow suit. RSI is also on the move down to indicate that selling pressure is in play. However, these oscillators are already approaching oversold levels to show that buyers might take over once sellers book profits. 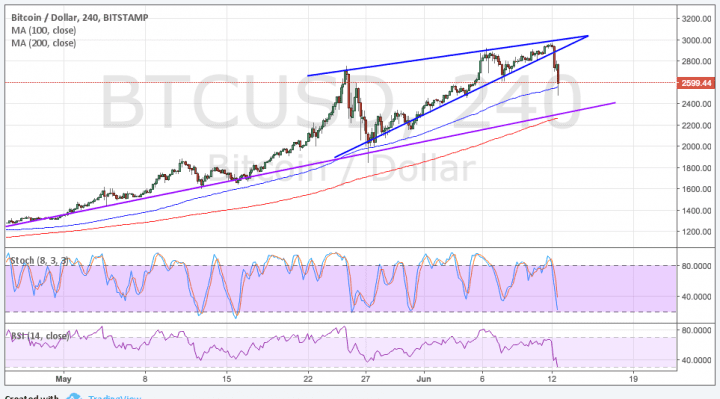 Analysts pointed to the recent problems being reported by bitcoin exchanges like Coinbase on an unprecedented level of traffic and trading activity. Coinbase comprises 17% of bitcoin activity in the US and has also previously reported outages on high levels of traffic.

Meanwhile, BTC-E tweeted that it has been victim to DDoS attacks. This exchange accounts for 6% of BTCUSD trading according to Cryptocompare. Another factor being blamed for the drop is the weakness in the US tech sector at the start of this week.

The dollar could see more catalysts later in the week with the FOMC statement coming up. An interest rate hike is widely expected so traders are now hoping to gauge whether or not the US central bank can keep up its pace of tightening until the end of the year.

Any shift to a less upbeat stance could weaken September rate hike hopes and lead to profit-taking for the dollar, which would be positive for BTCUSD. On the other hand, continued optimism and reassurance from policymakers could shore up dollar demand versus bitcoin.