Bitcoin continues to move inside its ascending channel formation and has bounced to the swing high upon testing the 38.2% Fibonacci retracement level. However, price seems to be losing its traction in heading north as it is finding a ceiling at the recent highs.

This could lead to another quick pullback before it resumes its climb to the resistance around 2500.00. The 100 SMA is above the longer-term 200 SMA on this chart so the path of least resistance is to the upside. In other words, the uptrend is more likely to carry on than to reverse.

Also the moving averages are close to the channel support around 2275 and also an area of interest. These could be enough to keep losses in check in the near-term unless there is a major bearish catalyst.

Stochastic is in the middle of its move lower to indicate that sellers are in control of bitcoin price action. RSI is also turning lower to reflect the presence of selling pressure. 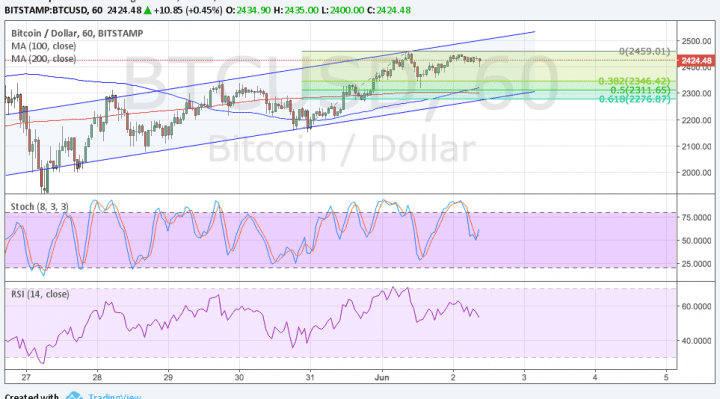 Bitcoin enjoyed a boost from the report that one of the top Chinese exchanges has reopened withdrawal for clients. Earlier in the year, bitcoin firms had been subject to a lot of scrutiny by monetary authorities investigating money laundering activity in the country. This led to restrictions in margin accounts and temporary bans on withdrawals, leading to speculations that trading could be halted altogether.

However, these fears are subsiding now that bitcoin activity can resume as normal again. This could lead to a resurgence in bitcoin volumes in China, which has been one of the top markets for the cryptocurrency. Traders are also keeping the cryptocurrency supported on news that an agreement on the scaling issue has been reached.

Of course this is also subject to comment from the community and it remains to be seen whether the agreement can push through and resolve hard fork concerns. In any case, bitcoin is also enjoying some support from the presence of persistent geopolitical risks in Europe and in the US.