Bitcoin has recently pulled up from its sharp drop below the $2500-2600 levels, but this seems to be a mere correction from a potential long-term drop. A head and shoulders pattern could form if this retracement is completed and the neckline is located around the $2000-2100 levels.

The 61.8% Fibonacci retracement level coincides with a former support zone, which is now keeping gains in check. The 100 SMA is below the longer-term 200 SMA on this chart so the path of least resistance is to the downside. However, the gap between the moving averages is narrowing to suggest a return in buying pressure if a crossover happens.

Stochastic is pointing down to indicate that sellers are regaining control of BTCUSD action. RSI is cruising sideways to suggest a bit more consolidation before any big moves happen. A pickup in bearish pressure could lead a move to the swing low around $2100 and a break below this level could set off a long-term drop. 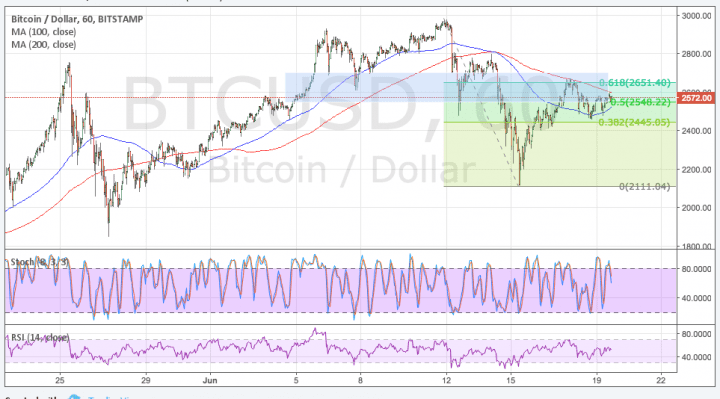 Note that the head and shoulders pattern spans $2000 to $3000 so bitcoin could fall by the same amount if the reversal formation is completed. On the other hand, a break past the 61.8% Fib could lead to another test of the all-time highs close to $3000 or even the creation of new ones.

Dollar demand has been strong at the start of the week thanks to hawkish remarks from FOMC policymaker Dudley. He confirmed that the Fed should stay its course on tightening because the economy is near full employment and that rising wage growth could keep inflationary pressures supported. Other FOMC members Evans, Kaplan, and Fischer also have speeches lined up.

So far, there have been no other negative reports from the bitcoin industry apart from the previous week’s outages on major exchanges due to an unprecedented level of traffic and trading activity. Risks associated with Brexit could lead investors to move their funds out of the European markets and onto alternative assets like bitcoin and other cryptocurrencies as negotiations have started this week.