Bitcoin continues to set one record high after another and has just breached the $2000 mark. Profit-taking could happen right here and take bitcoin for a large correction.

On the 4-hour time frame, it can be seen that price is trading above an ascending trend line since the start of this month. A major pullback could lead to a test of this support area, which lines up with the 200 SMA dynamic support and a former resistance level. Plenty of buyers could be waiting to enter at this correction zone, possibly taking bitcoin back up to the $2000 area and beyond.

However, if buyers are eager to hop in, the support at the shorter-term ascending channel could already keep losses in check and take bitcoin up to new highs closer to $2100 at the channel resistance. Stronger bullish pressure could spur an upside break from the resistance and start an even steeper rally.

The 100 SMA is above the longer-term 200 SMA on the 1-hour time frame so the path of least resistance is to the upside. This means that the climb is more likely to resume than to reverse. Also, the gap between the moving averages is getting wider to reflect strengthening buying momentum. 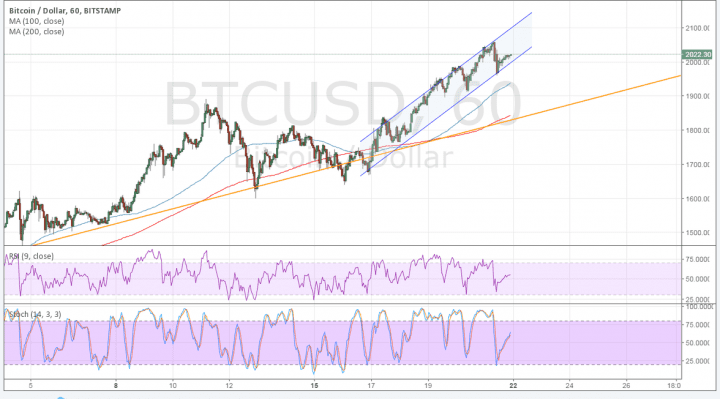 At the same time, stochastic is heading up so bitcoin price might follow suit. RSI is also heading north even without hitting the oversold area, signaling that more buying interest is in play even without huge corrections.

Market factors continue to favor more gains for bitcoin, which is strongly supported by rising volumes in Japan after the government decided to accept the cryptocurrency as a legal form of payment and by increasing geopolitical risk in the US.

Investors are keeping very close tabs on the investigation into the alleged leak of highly-classified information to Russian officials by the US President himself. Speculations of impeachment are currently weighing on US markets, along with expectations that the fiscal reform agenda will be pushed back. To top it off, this is also clouding the US economic outlook, dampening demand for the dollar on weakening Fed rate hike expectations.