Bitcoin has just hit a new record high but could be due for a pullback, offering more buyers a chance to join the rally. Price is trading inside an ascending channel on its 1-hour time frame and is currently testing resistance.

Applying the Fibonacci retracement tool on the swing low on May 3 and swing high yesterday shows that the 38.2% level lines up with the channel support at $1485. The 61.8% level is in line with an area of interest or former resistance at $1465 that might hold as support moving forward.

The 100 SMA is above the longer-term 200 SMA on the 1-hour chart so the path of least resistance is to the upside. The gap between the moving averages is also widening to reflect strengthening bullish pressure. If the Fib levels hold as support, bitcoin could test the swing high around $1520 or set another record high at the channel resistance around $1540. 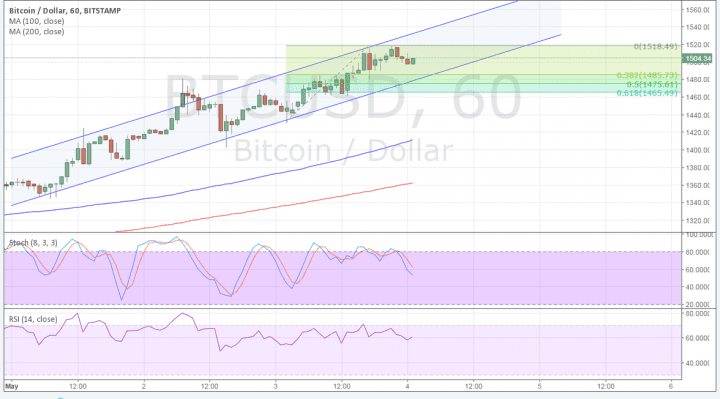 Note, however, that stochastic is turning lower so bitcoin might follow suit. This indicates that buyers are getting tired and might let sellers take over from here. A bit of bearish divergence can also be seen since stochastic made lower highs while price had higher highs. RSI is also moving down so bitcoin price might follow suit.

A strong pickup in selling pressure could lead to a break of the near-term channel support and open the chance for a major correction in bitcoin. After all, dollar strength has been revived by upbeat jobs figures and the FOMC’s decision to retain their outlook for growth and inflation. Fed rate hike expectations increased after the latest FOMC statement as policymakers reiterated that inflation is moving close to their 2% target and that the slowdown in Q1 was just transitory.

Meanwhile, bitcoin is also gaining a lot of support form reports indicating that trading volumes are surging in Japan. This comes after the government recently recognized bitcoin as a legal form of payment, setting a precedent for other regulators that are looking into the cryptocurrency. Apart from that, hopes that the Winklevoss bitcoin ETF could get another chance at SEC approval is also yielding gains for the cryptocurrency.