Bitcoin looks prime for a pullback on its short-term uptrend as price is hitting the top of its ascending channel pattern. Price could retreat to the 50% Fibonacci retracement level at the channel support near the $7000 mark.

A larger pullback could last until the 61.8% Fibonacci retracement level close to the 200 SMA dynamic inflection point. The 100 SMA is below the longer-term 200 SMA, though, so the path of least resistance is to the downside and a selloff could still ensue.

Then again, the gap between the moving averages is narrowing to reflect slowing selling pressure and a potential upward crossover that might draw buyers in. If this happens, bitcoin could still bounce off any of the nearby support zones to test the swing high $7323 or the channel resistance closer to $7600.

However, stochastic is heading lower to indicate the presence of selling pressure. RSI also has room to fall, which means that sellers could stay in control for a while. Buying pressure could return once both oscillators turn up from the oversold levels. 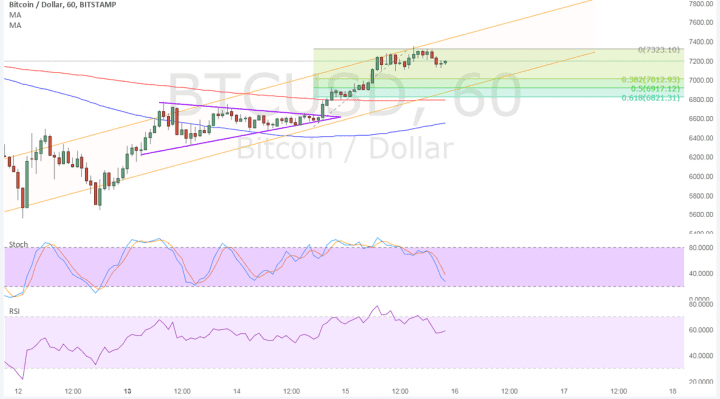 Dollar pairs are currently consolidating ahead of the expected vote on tax reform by Congress this week. There are still some conflicts, even within the GOP, to be settled so traders are not sure if there will be enough votes to pass the bill or if the vote will actually push through.

Positive updates and fewer headwinds could be positive for the dollar and lead to a break lower for BTC/USD, but more setbacks could push bitcoin higher instead. After all, the cryptocurrency is slowly getting back on its feet after selling off on the suspension of the network upgrade.

Rival versions like bitcoin cash and bitcoin gold appear to be struggling to gain any traction enough to pose stiff competition for the original version. Network acceptance for these ones is still low, but traders also can’t help but be wary of potential issues as the original core version struggles to handle more transactions in the absence of an uptrend.